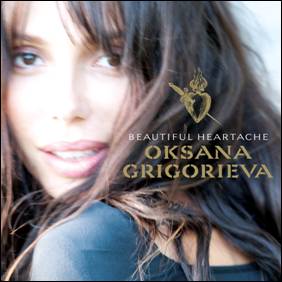 Grigorieva may not be a name familiar to many in this country, but it’s certainly one that’s known to the likes of Mel Gibson and Josh Groban. Hollywood Superstar Gibson was so impressed with Oksana’s talent that he signed her up to his Icon distribution label, while Josh Groban recorded one of her songs, ‘Un Dia Llegara’ for his album ‘Awake’. Impressive credentials, combined with a history that takes in not only her native Russia, but England and America too, makes her an interesting review subject.

Beautiful Heartache is 11 tracks of mostly self written songs, with a cover of Russian song ‘Dark Eyes’, and lyrical collaborations with Mel Gibson and Charlie Midnight in between. Oksana’s style leans quite heavily on traditional Eastern European sounds, and her classical piano training, although you can also hear some modern guitar/drum arrangements and spiritual lyrics throughout the album. To be honest, the first thing you notice about this album is the mood, which can be a little too dreary and dark; I was hoping for something happier and lighter. There are also tracks like ‘Beautiful Heartache’ where the chorus could have more impact, and the backing vocals could be improved, which makes the songs harder to get into. That said, there are some things of note that stand out on the album, and evoke very strong images. The Russian track ‘Dark Eyes’ put me in mind of war movies, or old black and white films, while ‘Evening With Daddy’ has a slightly spiritual feel, and could easily be used as music for a ballet. ‘Flying Upside Down’ is also very visual, and flows much easier than some of the other tracks; you do get a sense of soaring/flying when you listen to it. As far as strong tracks go, I think ‘Angel’ would have to be one, thanks to it’s country-esque LeAnn Rimes influence, while ‘Aint Right’ with it’s well written story/pop melody, is also worth a listen.

Overall, I’m not sure how this album will translate into success in the U.K market, and although there were some interesting points on the C.D, I couldn’t quite get into the mood and vocals in places. Different and intense, with a slightly old fashioned charm, but not really for me I’m afraid.

‘Beautiful Heartache’ is available now from I-Tunes, and www.oksana.fm. Also look out for three Mel Gibson directed video’s on Youtube.