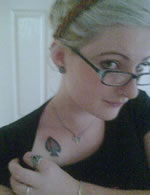 Hi, i’m Mel, the Australian correspondent! I’m a tattooed freak, vintage       fashion loving German speaker – but most of all i’m a huge fan of the alternative/metal persuasion of music.

I think my journey into my obsessive music fandom started when I was 10. I went to see the pop sensation boy group 5ive with my sister, and sort of just fell in love with seeing bands live. Albeit, 5ive weren’t exactly ‘live’.
Regardless, from that point onward I became obsessed quickly. One wall of my bedroom was entirely covered in 5ive posters, that was was all I ever listened to.

Fortunately, puberty came along, and I got real angry at the world, real quick. I hit about 13 and started listening to a lot more of the Australian alternative scene. Mostly Silverchair (before they were overrated) Grinspoon, and Living End. Of course, I began my journey with Greenday, as most teenagers do, I think. Greenday were always a big influence on what I listened to, and how I dressed. But Silverchair, were my new obsession. That wall of 5ive was deconstructed several years before, and it was now the wall of Silverchair. Oh I thought I was going to marry Daniel Johns, and I was going to be a rockstar – I was 14 too, that’s how old he was when he got a record deal. It was BOUND to happen.

When I was 15, I started an exchange in Germany. All of my classes were spoken in German throughout highschool, so I was already well versed in the language. I arrived in Germany, and my school was absolutely littered with punks. I mean, the real deal Punk. These punks knew the whole catalogue of every Misfits, Iggy Pop and Ramones song ever. They had mohawks that were six stories tall, and more than half of them actually lived on the streets – turns out they were kicked out because their parents didn’t like their lifestyle.
That was another defining moment in my music obsession.
After I came back from Germany I was heavily into Nine Inch Nails. They still are the most important band in the world to me. I’ve seen them three times, and listen to them at least four times a day. They have always been a constant when it comes to putting on a great show, same goes for Interpol and Queens of the Stone Age, both of which i’ve seen twice.

My greatest moment in music was definitely meeting Nick Oliveri – While he was still in Queens of the Stone Age (my second favourite band of all time) He was perusing the albums in my local alternative store the day after his gig in my city. He was sweaty. I loved it. I’d met a rock god.

I’m currently taking a break from my Film and Television studies at the University of Queensland.
I need more time to actually figure out what i’m doing – unfortunately, Rolling Stone isn’t begging to hire me just yet.

Music is always important in life, and you never really know why until after it’s happened. For example, that first gig, spread into something I never expected coming – I just hit over my 200 mark on gigs seen since I was 14. That’s an average of 33 gigs a year. I wish it was more.