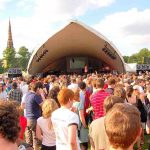 Music and students are two ingredients that have always gone very well together, and live music in particular has played an important part in university social lives up and down the country. There’s a group of students in Manchester however, who wanted more than just a local band down their student union bar; they were thinking big!

The result is the Mad Ferret festival, which returns to Manchester for its second year in 2009. The event, set up by a group of student friends, is named after the famous Manchester expression ‘Mad For It’ (get it?!). After a successful first year, the team are back with fresh ideas, more stages, and they’ve added an extra day’s fun to the schedule too.

The festival takes place from the 12th to 13th June in Platt Fields Manchester, and once again aims to showcase not just the best international talent, but the local music scene as well. This year’s line-up will see the likes of Finlay Quaye, The Streets, and Roots Manuva (pictured)

take their place among a growing list of headline acts, while the local talent will include The Travelling Band, The Gentlemen’s Dub Club, and Riot Jazz Band. Other additions to the line-up are a host of DJ sets, featuring Freestylers, Pendulum, and DJ Hype. The music promises to be an inspiring mix of Reggae, Dance, Rap, and Drum N Bass.

The team behind Mad Ferret also aim to involve the community in many other ways during the festival. Expect the unexpected, oh and a host of comedians, artists, and circus performers as well.

All this and more is coming your way in June, so what are you waiting for? Buy your tickets now! The first 500 tickets cost £45, and are £55 thereafter from www.ticketline.co.uk. There is no camping available on-site at this festival, so the Mad Ferret team are encouraging you all to indulge in the craze that is couch surfing (www.couchsurfing.com), where locals will host a visitor during the event.

If you’re ‘Mad For It’ then this is the festival for you. To find out more, visit www.madferretfestival.com. Some of the profits from this year’s festival will go to ‘Bollocks To Poverty’, the youth arm of Action Aid. To find out more about their work go to www.actionaid.org/bollocks.