Jamie Cullum: I’m All Over It 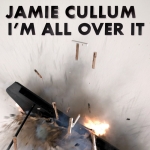 I’ve heard tell that some people make the mistake of calling Jamie Cullum ‘just a jazz musician’, but for me Jamie Cullum isn’t ‘just’ anything! Jamie is a singer-songwriter-jazz pianist who lives his musical career as an experiment. On his forthcoming album ‘The Pursuit’ he works his way through many different styles of songs, fusing classic jazz and modern influences at the drop of a hat. Whilst always maintaining his distinctive, yet quirky old fashioned charm.

The first single to come from the album is called ‘I’m All Over It’ and has been described by Jamie in his press material as a ‘snappy pop song’, that’s a cross between 1970’s Elton John and Ben Folds Five. I would second this description, and perhaps expand it to include a bit of Madness, as I’m sure I can hear a Ska influence in there. The story behind this lively burst of pop/jazz is about a break-up, and getting to the point where you can move on from it. Something to relate to then, delivered in Jamie’s stylish yet edgy vocal style. It will tick all the boxes if you’re looking for a different, toe tapping song, though the vocal/piano improvisation when the song reaches its climax is a little unusual for me.

The video for this song is set in an old fashioned hotel, with Jamie Cullum taking on the role of lounge pianist, and Bell

Boy (not quite sure on that one!). As the song progresses, different scenes are shown throughout the hotel, the participants frozen in tableaus, perhaps to represent someone frozen in time and unable to move on from their broken relationship. Gradually the scenes come alive, with people dancing and entering into the lively spirit of the song. By the end nobody is frozen, and ‘everything is fine’. It’s certainly an unusual way of representing the lyric in the song, and it had me watching a few times to try and work it all out. I guess that’s the thing with experiments, they do ignite your curiosity sometimes, and although this is a pretty good one, the unusual end to the song didn’t fully convert me to the cause.

‘I’m All Over It’ is available from November 2nd 2009. For more information visit www.jamiecullum.com. To view the vide click here