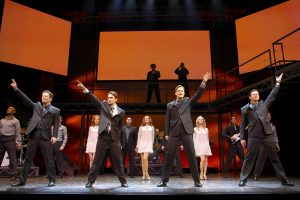 Jersey boys is a West End and Broadway show that needs no introduction. The powerful story of Frankie Valli and the Four Seasons has, in a relatively short space of time has won or been nominated for some prestigous awards, some voted for by the public. We’re delighted to introduce to music.co.uk new cast member Mark Carroll, who has recently taken on the role of Ronnie.

Read on to see what the multi-talented singer/songwriter has to say about Jersey Boys, the musical he’s written, and shrimps (yes I do mean Shrimps!)

How would you sum up your career in musical theatre so far?
“20 years of very diverse work with some of the top directors and producers in Britain creating new theatre as mainly an original cast member of new work.”

How have you enjoyed your time in Jersey Boys so far? Are cast changes much different from everyone going into something new?
“Everyone is really friendly and has made joining the company very easy. This is only my second time going into an established show and obviously you have to create what happened before (don’t change a winning formula) so there is no scope for creative imput.”

Do you have any favourite parts of the show/songs?
“Obviously my big scene as Donnie and the three big numbers SHERRY, WALK LIKE A MAN and BIG GIRLS”

What should we all know about Mark Carroll the person? What do you enjoy doing outside the theatre?
“What you see is what you get; I don’t suffer fools gladly and have great respect for those who do their job well. Out side the theatre I enjoy friendships food drink travel a good film and the older I get the more I value my own time and space.”

You’ve been involved in writing some musicals of your own? Is this something you’d like to do more of?
“I would love to have a show up and running. I workshopped THE ATTIC at the Haymarket Theatre with the cast of Marguerite including Ruthie Henshall, and the concept album is available from www.dresscircle.com . I have recently had a meeting with Nick Hytner at the National Theatre so things are moving in the right direction.”

What sorts of storylines do your musicals and songs have, what inspires you? Have you been inspired by anything random?
“My musicals are based on GUY FAWKES, THEATRE OF BLOOD (Horror Film), and a best selling novel by William Horwood, DUNCTON WOOD. More info at www.markcarrollmusicals.com .Quite a lot of my songs are based on past relationships( always write about what you know or have experienced). I once wrote a song about a shrimp (don’t ask) that was recorded with the chief whip of the House of Commons .Lord Berty Denham.”

“Who would be in an ultimate cast list for one of your productions?
The cast I used on the concept album including Ruthie Henshall Annalene Beechey Julian Ovendon and Alex Hanson”

Do you have any funny off-stage moments to share from any of your productions?
“I Went on stage in a pair of green luminous slippers i forgot to take off in the wings.”

Do you have any future hopes and ambitions?
“To have a hit single recorded by a female artist.”

“Sometimes interviews can be a bit predictable, is there anything you’d wish to be asked about? And what would the reply be?”
“I’d love to be asked about the state of the economy!!!! Yeah like anyone cares….no not really.”

And there you have it. The world according to Mark Carroll. A man with many talents, many ambitions, and a song about a Shrimp! You can catch him amd the rest of the cast in Jersey Boys at London’s Prince Edward Theatre. For nformation and tickets visit www.jerseyboyslondon.com
Keep your eyes on music.co.uk for more from the world of musical theatre!