The Gadsdens: The Sailor Song 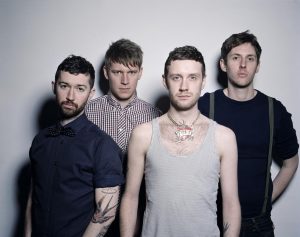 ‘The Sailor Song’ may already be familiar to those who were hovering around the main stage at Glastonbury this year, as it was used as a soundbite for a campaign by Oxfam. Greenpeace, and Water Aid, in their charity awareness video. For the rest of us, this will be a first insight into the world of The Gadsdens, an innovative four piece band from London.

The Gadsdens style is essentially melodic indie/pop, based around a piano arrangement, and laced with subtle drum/guitars, and a rhythmic beat. The Sailor Song displays all this, and more melodic melancholy than you can shake a stick at! In my musical world at least, this is different, and the vocal is quite distinctive. The one thing I would say though, is it might be better to listen to the song on it’s own before watching the video, as you do pay more attention to that at first!

Although after watching it several times, I still didn’t quite grasp the storyline of the video, and how it relates to the song, I was still entirely drawn into the animation. It follows a series of characters, on the hunt for glowing gems that complete some sort of ornament. They are followed by a shadowy character, who trails them, and their treasure with a shotgun. It’s quite deep, dark, and moody, and suits the spirit of the song well. Overall an interesting package, and it left me wondering what else the band have in store for us in the future? Fingers crossed this single is a success so we can find out!

‘The Sailor Song’ is released on November 29th. Click here to view the video on You Tube.