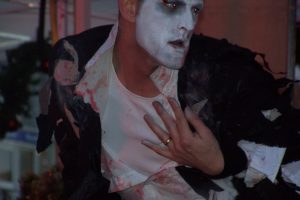 Quite why Chelmsford Town Centre comes alive in the freezing month of November, more than any other month of the year, I don’t know, but suffice to say us Chelmsford folk, made the most of all the entertainment on offer at this years Chelmsford Light Switch On event.

The event always attracts large crowds to the town centre, but I think this year surpassed all expectations, with around 8000 people estimated to be around the BBC Essex stage watching the entertainment. I went down in the afternoon to catch some of the action, and although cold and shivering by the end, had a great few hours in town.

First up for me were the Xtreme Dance Group from Colchester, who I was delighted to see were performing to one of my favourite Michael Jackson songs, Thriller. I really enjoyed their routine, costumes, and make-up and it started off my afternoon nicely. Some of the Xtreme dancers also took to the stage backing Chelmsford singer Lee Bennett, as he performed his track, ‘Never Get Enough’. The song turned out to be a very funky dance number and both the dancers and Lee put in a professional and polished performance. Lee also included the Daniel Merriweather hit ‘Red’ as part of his set, which suited his voice very well. 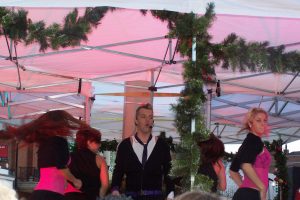 Also performing on the BBC Essex stage was Sharon Rose, who entertained the crowd with a mix of Pop and R&B tunes, and Basildon based Josh Dubovie, who included some lively Rat Pack numbers in his set. There were also two singing competitions to judge, Singing Stars, which featured some very talented local school children, and Shame Academy (part of the Children In Need Appeal), which featured BBC Essex presenters and journalists. As you can imagine, the talent here was more than a little bit questionable, but this segment of the show was very entertaining. There were a few Santa Hats and Christmas songs in evidence, 3 guys in Elvis costumes performing a Queen number, and an old school Take That tribute. Yes Chelmsford can do ‘random’ very well, and Take That weren’t that bad actually! The judges obviously enjoyed all the performances, as I could see them swaying and singing along. 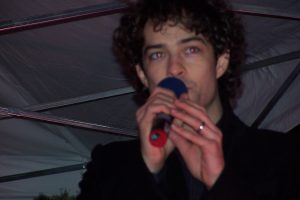 Lee Mead Singing 'Any Dream Will Do'

With any light switch on, there is always a headline act, the one that gets to press the shiny red button, or in our case plunger. This time round it was Lee Mead who I was very much looking forward to seeing for the first time. Lee was one of the judges for the talent competitions, and seemed to thoroughly enjoy himself despite the cold. Before he helped turn on the lights, he also gave us a song, and got everyone going with his rendition of ‘Any Dream Will Do’. Unfortunately the crowd only got treated to one song, which was a bit disappointing (Lee if you’re reading this Chelmsford would love an encore!), but it rounded off a great afternoons entertainment, and has proven once again, that Chelmsford knows how to celebrate!

Happy Christmas Everybody, and here’s to next years Christmas Light Switch on!