I wonder if they use booster seats?

You know you are onto a winner when you have one bandanna badass and a dayglo haircut emerge from a beefy 4×4 to the backing of electronic music which sounds like it was created by Rave Ejay 0.1 via a spectrum.

It gets better as the boot opens to show some ‘shorties’ coming out to join the fun!

The whole crazy episode is as though a member of Busted/McFly (The pink goth-glo)  has persistant vomiting and has accidently been taken to a Soulja Boy Juniors video shoot. Without any hint of thought they auto-tune ‘rap’ about ‘Versace’, ‘Rolex watches’, ‘Bentleys’ and other such bling while standing infront of a Jaguar that could have pulled out of 10 Downing St in the early 90’s. Perhaps the ‘hardcore shit will make you feel the toxic’ is a vauge reference to the credit crunch and they have nicked Ken Clarke’s motor? 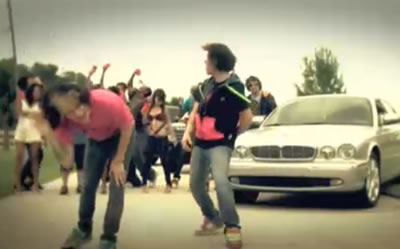 Around the two minute mark things fall off the cliff of quality. “Liar” is screamed in stereo at random girls with some bloke in a pig costume (I have since found out this is the mascot called Bree) making an apperance. This screamo / crunk / crap cocktail will probably go down a storm on myspace however if this is the future of music I am worried.

Looking on the website of the guys who filmed it (‘eat cake’ films), they are keen to tell people ” There was no drinking of alcohol on set. The bottle you see seven drinking from….that’s apple juice believe it or not!” I can believe it! The bit I have trouble with is a bloke called ‘Se7en’ aka Steven to his parents who is in danger of cutting himself if he gets any more edgy.

I watch far too many music videos, and this has to be the most confused and inane one for a long time. I would hope it is a parody and excellent social commentary, in which case I would be impressed. I am not though, just saddened if not a little scared!

Brokencyde Freaxxx on Youtube. Be warned, this is 3.52 minutes of your life which you will never get back.