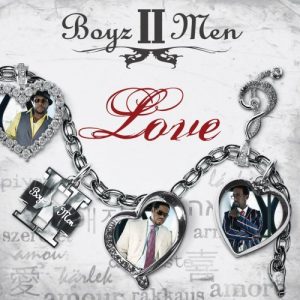 When it comes to Boys 2 Men, WOW is quite often the first word that comes to mind. Not only have these guys forged a career that will celebrate its 20th anniversary in 2010, but during that career they have amassed around 60 million sales, and multiple Grammy Awards. Their smooth and distinctive vocal talents have made them a sell out act all over the world, as they combine pop, soul, R&B, and vocal harmony work to awe-inspiring effect.

This, their latest album release, is a collection of popular love songs; something old, something new, and a few surprises as well! My criteria for judging an album of cover versions has always been, do I like the song in the first place, and also have the group put their own stamp on it/added some value. Boys 2 Men start off well on both counts, with a different version of the Take That hit ‘Back For Good’. Typically the harmonies are smooth and polished, and soar in all the right places, the new musical arrangement is interesting, with a good beat, and they prove their vocal talents with a little a cappella burst towards the end as well. This was one of the highlights of the album for me, along with their versions of ‘If You Leave Me Now’ by Chicago, and Amazed by ‘Lonestar’. The three piece give a natural, almost effortless, performance of ‘If You Leave Me Now’, over a very emotive melody. ‘Amazed’ has some familiar instrumentation, but some subtle vocal touches that add a different edge to the track. Also scoring points for originality is the inclusion of ‘Iris’, a track by rock band The Goo Goo Dolls. A rock track is the last thing I was expecting on a Boys 2 Men album, but it just goes to show how versatile music can be. The strings on this song are very powerful and show a slightly darker side to the band.

Other points of interest came when there were songs I wasn’t familiar with, like the Journey song ‘Open Arms’, and ‘Cupid’ by Sam Cooke. The latter is very old school with plenty of schoobie doo’s, while the former has metamorphosed into a soaring ballad. The remainder of the covers on the album stay quite true to the original versions, especially ‘When I Fall In Love’, featuring Michael Buble. This, and ‘Time After Time’ were two choices that didn’t really excite any reaction in me, and were quite predictable.

Apart from several rather dull song choices, there wasn’t really much I could ‘fault’ about this album. There are a good selection of familiar tracks to add some nostalgia, contemporary covers to appeal to a younger audience, and a few surprises to illustrate the group’s versatility. These guys have a polished, smooth, and heart warming soul style, and I’m sure that this album will be a big hit. ‘Love’ might seem better suited as a Valentines Day gift, but Boys 2 Men are for life, not just for Christmas, so why not buy this for your loved one to enjoy all year round!