If there’s one thing that might just distract the nation from Facebook for a while, it’s the group that formed through it, and I’m delighted to say that the award winning classical crossover group Blake, are back with a new album.

‘Together’ is an interesting mix of traditional songs and hymns, and more modern pop tracks. All the tracks seem to have been carefully chosen for their sense of romance or emotion, and serve to further illustrate the versatility of this vocal group. Their most surprising choice is perhaps the U2 song ‘With Or Without You’, and although I’ve never been a big fan of this song, I quite enjoyed their catchy vocal arrangements. They add their own stamp to this, and the other modern covers on the album. ‘She’ features a charming Sax arrangement by Britain’s Got Talent contestant Julian Smith, while ‘Bridge Over Troubled Water’ has a soft, cinematic, and slightly ethereal quality that I actually preferred to the original version of the song.

I guess you could say that was something new, and borrowed, all in one, now for something old! Although some may be looking for more originality, to my mind, it’s only right that the traditional tracks chosen for ‘Together’ are treated with respect, and not tampered with. The first of these is ‘Bring Him Home’ from Les Miserables, a moving song, where you can hear the band move from gentle to soaring vocal arrangements, with effortless ease! This is followed soon after by the sad, mournful, Christian Hymn ‘Abide With Me’, and the proud and patriotic ‘I Vow To Thee My Country’. Both songs are an almost perfect fusion of lyric and music, although for me, there could’ve been a bit more of Blake, and a bit less choir in the latter tracks. My only other low point (if you could call it that) is the inclusion of Nessum Dorma. For me, it’s just been done too many times for it to be exciting. In amongst the familiar though, there’s also the less well known (in my case at least), yet very soothing, ‘La Califfa’, and ‘She Was Beautiful’ (Cavatina). Both were charming in their simplicity and an enjoyable listen.

An album review wouldn’t be complete without highlights, and although all the songs ar 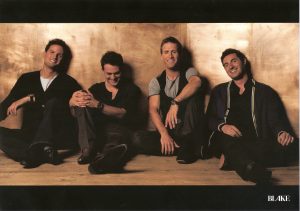 e well arranged and performed, there are two that stand up above the rest, and deserve a special mention. The first, ‘Titans’, is an unexpected surprise. As the title might suggest, there’s quite a bit of power and strength behind the music, which is interlaced with subtle harmonies from the band. The other highlight is also a surprise, as it’s the one original song on the album. Composed by supreme songwriter Denise Rich, ‘Unsung Hero’ is an absolute gem of a song, both lyrically and musically. It’s also a duet with Caroline Redmund Lasher, an unfamiliar name, but one I’ll certainly be looking out for in the future. It put me in mind of the style of song you’d hear soaring and swirling around in a Disney animation. It was enjoyable and made me smile. You can’t get much better than that!

I guess in some ways ‘Together’ doesn’t add anything to what I already know about Blake; that they are first class vocalists, who give just the right vocal touch to a wide variety of material, their performances work in a wide variety of venues, and they have a reputation for giving the audience a unique cover version, which you cannot fault. However, the strength of ‘Unsung Hero’ would suggest possibilities for future collaborations, and original material, that shouldn’t be ignored.

Rumour has it that Blake will launch their assault on America in the near future, and one can only hope that the Americans enjoy the group, and the tracks of this album, just as much as I have.

‘Together’ is available now from all good record stores and download sites. For more information on the band visit www.blakeofficial.com.