The Temper Trap have been causing quite a stir of late, and the four piece from Melbourne Australia seem to be taking the UK by storm. This is all for good reason mind, the group create a huge sound in each of their tracks, with their escalating atmospheric offerings, adding to a beautiful and immersive listening experience. 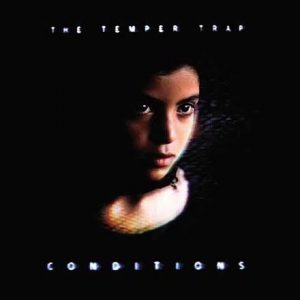 The group present their debut album ‘Conditions’, recorded and produced with Jim Abiss, which has already hit the #9 spot in Australia and is wowing critics and music lovers alike in the UK.

The album isn’t exactly what you’d expect from a band that’s been generating so much hype. As grand as the delayed guitars and impressive Falcetto of singer Dougy Mandag are, there’s a definite laid back feel which also shapes the sound, and is to be honest, rather refreshing. Mandagi’s vocals are a definite selling point, but the group as a whole have instant appeal creating catchy and emotive tracks. As ‘Love Lost’ kicks in you can tell what you are in for, there is the big rock sound reminiscent of Coldplay and U2. Big simplistic, and effective parts that seem to give the illusion of huge space. What’s great is that there isn’t anything overcomplicated here; the flowing drums and rhythm section work well with the layered guitars, leading to a whole sound that’s bigger and more impressive than the sum of it’s parts This simplicity allows the vocals to shine through. It really is easy to be drawn in to the work.

Fader is a personal favourite, the track oozes energy and has a great upbeat vibe to it splitting the album up well.

‘Science Of Fear’ is another great track, for me it’s all about the more upbeat songs, which really seem to stand out and distance the band from their peers.

Perhaps The Temper Trap are so appealing, because they provide a nice break from so much of the over-hyped nonsense that gets forced into the musical Jungle year on year. I feel I may have fallen slightly in love with ‘Conditions’, each song creates an illusion of space, and takes you on a different journey showing that good songwriting can go a long way. The only worry may be that the hype is just hype; this is definitely one for those who are partial to the space filling anthems of U2 and Coldplay, but give it a try, you may get drawn in and not want to come out.

‘Conditions’ is available now, the band will promoting the release with a UK tour starting in September, check out the official website www.thetempertrap.net, or seek them out on myspace.