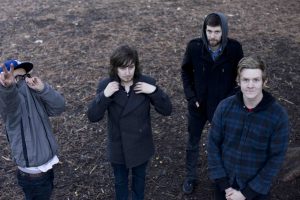 As Australian exports go, this has been a pretty successful one, as The Temper Trap seem to be causing a stir all over Europe, and America too, which we all know is no mean feat. Luckily for us Brit’s, Melbourne’s finest rock act have a rather powerful cure for the New Year blues in the shape of first 2010 release, ‘Fader’.

I was instantly intrigued by the church organ style intro to this song, a sound which continued into the main part of the song to create something a little different. This is layered under danceable, very catchy drum beats, and some cool guitar riffs. The backing vocal harmonies hint at a wide vocal range, but they, along with the music, do sometimes overpower the lead vocal. This means the lyric/story of the song though interesting, isn’t always as clear as it could be. Apart from that, there’s not much I could fault about this song, it would certainly get me dancing through January!

My ‘Fader’ promo CD also included the video for the single. This was a performance piece set around hundreds of colour changing light sticks, which were hanging from the ceiling. The simple, yet slightly retro light effects add something different to the normal ‘band in a warehouse’ affair that I’ve seen many times before, so kudos to the band for that. All in all, it’s an attractive package of indie/pop/rock, that will appeal to those seeking both credible and radio friendly anthems. I couldn’t resist tapping my toes along to this, but can you?

Check out ‘Fader’ for yourselves when it hits U.K shores, stores, and download sites on January 4th. For more information visit www.thetempertrap.net