Taio Cruz Live In Session At The Big Top 40!

When music.co.uk was asked if we would like to attend an exclusive acoustic session, and Q&A recording with chart sensation Taio Cruz at the BIG Top 40 Radio Show, we agreed with no hesitation! Our reporter Beth, was one of just a small number of people attending, and this is her report. 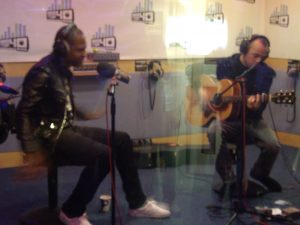 When I arrived at the studio Taio was already there, ready and waiting, in the recording booth with his guitarist. The English born and bred singer, song writer and music producer, sat in his chair unfazed by a small crowd of journalists/music bloggers and the radio team who were watching him in anticipation. Once everyone was gathered in front of the glass window, and a quick introduction was made by Rich and Kat (the presenters of the Big Top 40 Show), Taio was ready to begin his first track.  We were treated to three perfectly sang live acoustic tracks, the first was his number one hit ‘Break Your Heart’, which was followed by his new single ‘Dirty Picture’ and the session ended with Come On Girl , the third single from his first album. We were told that he was suffering from a cold, which no one would have noticed, as the singing was perfect, and his voice was polished and smooth.

Rich and Kat then stepped up to the mic, and started firing Taio with a selection of questions from various bloggers and

journalists that had attended the session. I’m pleased to say two of our questions were asked!  We found out that Taio is currently doing promotion work for his new single and will also be busy promoting his album in the USA.  He sadly announced that no ‘Taio Tour’ is being planned at the moment.  When asked if he preferred to be singing, writing, or producing, he said he couldn’t chose one as he loves doing them all.  Putting the busy schedule aside, he does look forward to chilling out in front of the television and watching his favourite comedy TV shows- ‘The Big Bang Theory’ and ‘Two And A Half Men’. Although he’s already worked, written, and produced for big names such as Britney Spears, Usher, Alexandra Burke, and The Sugababes, (to name just a few) Taio would’ve loved to have done a collaboration with the late King of Pop- Michael Jackson.  Before making it big, and becoming a Brit Award Winner/MOBO Nominee, some people may have had the pleasure of talking to Taio as he used to work as a telemarketer.Though luckily for us, he continued working on his music at the same time, and pursued his musical dreams, which made him the success that he is now.

Once the Q&A was over, we were able to have a quick meet and greet with the man himself, and I managed to sneak in an extra question for those of you who are interested in Taio’s fashion and accessories – The ROKSTARR  brand (named after his second and current album). Yes, not only is this 27 year old a big success in music, he has released a brand of Sunglasses.There have been rave reviews about them, from big celebs such as Justin Timberlake, Kanye West and JLS, a number of stars such as Kelly Rowland, Shontelle and Fightstar have also been seen wearing them.  Taio revealed to us that he is planning to launch more products, such as Watches, Bags, T-Shirts and Fragrances. Some of these items will be available to buy in the next couple of months, so keep an eye out for them on http://www.rokstarr.com/

To find out more about Taio Cruz, visit his official site http://www.taiocruzmusic.co.uk/
You can also catch Rich and Kat live every Sunday from 4pm-7pm on your local radio station, or listen to the show on http://www.bigtop40.com/.