Sweethead is the latest project of guitarist Troy Van Leeuwen, and the former A Perfect Circle and Queens of The Stoneage guitarist certainly knows how to do these things with style, what we have here is simply a work of pure rock and roll decadence. I’ve always been sucker for the sleazy but smooth vocals of Shirley Manson and the beautiful presence and stylish vocal phrasing of frontwoman Serrina Sims takes me back to those happy Garbage 1.0 days.

The E.P. kicks off with the guitar driven title track ‘The Great Disruptors’. There’s a definite Queens of The Stoneage ‘Songs for The Deaf/Lullabies’ feel to the song, it has the straight forward catchy guitar and rhythm work that gave QOTSA such appeal. The classic, alternative rock approach is quite refreshing and a great platform for the ever so melancholic vocals. The music’s not overproduced either, just alternative in your face rock doing what it’s meant to. 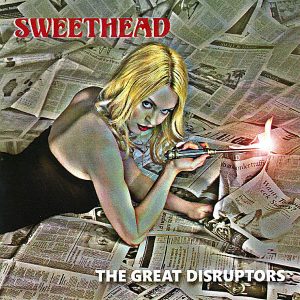 ‘Hardspun’ is more of the same, with the catchy guitar, smooth vocals and explosive chorus that is ever present throughout the E.P. It doesn’t quite have the magic of the title track but still sits well on the record.

‘Arcane Arcade’ showcases Simms’ vocals perfectly, another powerful track. While the songs are great however, the influences are ever apparent here, there isn’t anything wrong with the music but it seems like it’s more of the same from Leeuwen and isn’t really anything to get overly excited about. ‘Traumatised and Dumb’ takes the tempo down a notch and doesn’t really have the appeal of the first three tracks.

The E.P. concludes with a cover of The Kinks’ ‘Tired of Waiting For You’, it’s a good effort and ends the record well. All in all ‘The Great Disruptors’ is a great collection of alternative rock tracks that promise good things in terms of the forthcoming album. The only problem is that although it has everything you’d want from such a record,there isn’t anything particularly new or exciting going on. Definitely head over to the myspace to give the songs a listen however, and anyone who is a fan of Leeuwen’s work will be more than happy with what’s on offer.

The Great Disruptors Single Available 28th September, taken from the album ‘Sweethead’ due for release on October 26th.