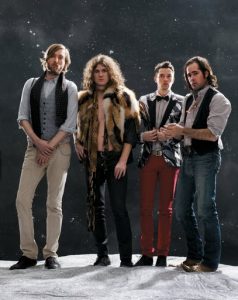 If you’ve been enjoying a rare burst of sunshine recently, then you’re thoughts may also have turned to the summer, and what a summer there is lined up for all you music fans.

June sees the return of Let Loose. Some of you may remember the 90’s band in their original line-up, with classic hits such as ‘Crazy For You’, ‘Seventeen’, and ‘Everybody Say, Everybody Do’. Now the outstanding Pop/Rock band is back, with a new line-up and some infectious new tunes. Original lead singer Richie Wermerling  still fronts the band, and is joined by Jamie and Grant Spicer on Guitar, Rob Lane on Bass, and Marc Danecker on Drums. They play an exclusive gig on June 4th at London’s Vibe Bar in Brick Lane. 250 tickets are available for this gig, more info and current availability from www.myspace.com/letlooseofficial.

The voice of UB40, Ali Campbell, has just announced a summer tour to coincide with the release of his new album ‘Flying High on June 22nd. The 11 date tour kicks off in Bristol on June 19th and criss crosses the U.K until July 4th, taking in Glasgow, Newcastle, Manchester, Sheffield, Birmingham, Liverpool, Nottingham, London, Ipswich, and Cambridge. Fans are promised a mix of well known UB40 hits and solo material, along with songs from the new album, which has a world music theme. Tickets are available now from www.bookingsdirect.com.

Staying with well known performers, Simple Minds will also be busy this summer with a series of outdoor festivals/gigs scheduled. These dates will take the band across Europe before arriving in the U.K on July 17th. They will play Blickling Hall in Norfolk on this date, before moving onto Edinburgh Castle on the 18th, and finishing at Liverpool’s Summer Pops Festival on the 21st July. Tickets are selling fast, so make sure you don’t miss out. For further details visit www.simpleminds.com. If you can’t make it along to one of these shows, don’t forget to check out their new album ‘Graffiti Soul’ released on May 25th.

If that isn’t enough to whet your appetite, then details are starting to emerge of more (yes more) summer festivals. Our round-up kicks off in Scotland with Homecoming 2009. Irvine Beach Park will play host to Tom and Gary from Snow Patrol, Babyshambles doing a DJ set, and other acts including Lisa Lashes. The festival takes place on the 2nd and 3rd of May. Website: www.homecomingfestival.com

Next up is the Hop Farm Festival, in Paddock Wood, Kent. Although full details of this year’s line-up have yet to emerge, previous events have seen the likes of Supergrass and Primal Scream take to the stage. The festival takes place on 4th and 5th July, and is sure to be a great event. If it sounds like the festival for you, then take a trip to www.hopfarmfestival.com for more details.

On 11th and 12th of July it’s Oxfordshire’s turn to come alive to the sound of music, with The Sugababes, Scouting For Girls, and The Magic Numbers among the line-up for Cornbury 09. Full line details for this superb boutique festival available at www.cornburyfestival.com.

Finally if you’re surviving the credit crunch and would rather experience a festival in the Spanish sun, then you might want to take a trip to Benicássim Festival, held on the east coat of Spain from 16th to 19th July. This year’s line-up includes Brit Pop’s finest Oasis, who will perform alongside Lily Allen, Glasvegas, The Killers, The Mystery Jets, The Kings Of Leon, Franz Ferdinand, and Paul Weller. For more information on the festival go to www.fiberfib.com.

That’s all for now folks; all that remains is for me to add to all the prayers for a sunny summer, and wish you all an enjoyable season of live music. Stay tuned for more gig news and previews, right here on music.co.uk.