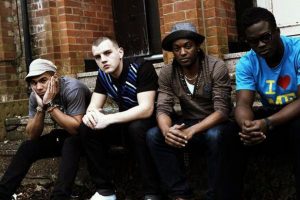 When it comes to the good old Bank Holiday, you never know what the weather is going to do, but you can keep the spirit of summer alive rain or shine, at Proud Camden this Bank Holiday. The London venues Bank Holiday Musical Extravaganza takes place on Sunday 30th August, and if the PR is anything to go by, it’s something not to be missed.

Keep your eyes and ears on the decks, as spinning for your listening pleasure will be DJ Bioux, Richie Dales, and Alan Cherry Cola. Expect a fizzy mix of Rock ‘n’ Roll, Swing, and Northern Soul to get you in the party mood. ‘Proudstock’ as this event has been named, wouldn’t be the same without some live music, and the organisers have delivered on this front too.

Creating some Bank Holiday Magic will be Kid British and Autokratz. For those who don’t know, Kid British (pictured) are a Manchester four piece, that have been compared to acts like Madness, The Specials, and various other 1970’s Ska bands. Expect social commentary, urban folklore, and a down to earth attitude. If that isn’t enough to capture your imagination, then you might be interested to hear that their current E.P called ‘Leave London’ sold out on pre release, and they even topped Oasis in a poll on Mancunian bands! Meanwhile it seems Autokratz have also been making a name for themselves of late. Their French influenced indie/electro tunes have gained them fans in both the dance and electronic worlds, and lead to them signing to French dance label Kitsune. Their C.D releases include ‘Down and Out in Paris and London’, and ‘Animal’, and I’m sure they’ll be performing tracks from both to keep you dancing long into the night.

Advance tickets are available now from www.viewtickets.co.uk, so what are you waiting for? Get your dancing shoes on and get down to Camden this Bank Holiday. More information on this and other great events held at Proud are on the website, www.proudcamden.com.