Striking A Chord With Rich Olding 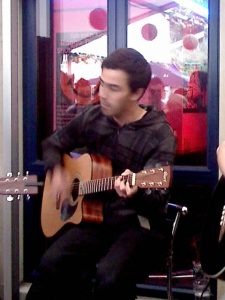 Rich Olding is one of the guitar players in new indie/rock band The Library Suits. The band is proving to be popular with Essex music fans, but of course it isn’t just about the people, it’s about the instruments that make the music too. So we caught up with Rich to find out all about his instrument of choice, and what the guitar is like to learn.

I started playing after I’d been given enough money to buy one of the cheapest starter guitar packs I could find after my 16th birthday. I was lucky enough to have a friend who really wanted to play the drums, and another who had a bass guitar, and we spent a good few Saturdays in the drummer’s parent’s garage stumbling through the easiest songs, while drinking 19p Rolla Cola. I eventually ended up in my first band with the drummer and a couple of friends from school, which was great fun, but we never gigged. I then joined a band with some guys from school, and for about a half a year we gigged a bit at the Army and Navy, until a couple of the guys went to university. At uni I let my guitar playing slip, as I didn’t have any real motivation to learn, and had other things to be busy with. After I came back, I started a band with my drummer friend and we gigged for a couple of years, that got me back into playing in a big way and I’m really grateful for that, otherwise I might have ended up putting the guitar to one side and concentrating on a career or something. Recently I’ve been playing guitar in a band called The Library Suits with some good friends, finally at a stage where I’m confident enough to express myself quite freely, we’re playing loads of gigs and recording, woo!

2. As an instrument what is the guitar like to play and learn?

Like any instrument the key is practice, practice and practice. It can be frustrating at times, but when you can knock out your favourite riff or song it’s such a good feeling. You will need patience though, as it’s easy to get annoyed when you’re doing the same thing over and over again. Fortunately the guitar is so popular; it’s fairly easy to find a guitar or teaching method that will suit you. The fact that so much music is guitar based, or contains guitar, means that you can practice along with your favourite CDs, which can give a decent sense of purpose, and make the process a lot more bearable in the long run.

3. What was the first song you learnt to play?

I think the first full song was “Come As You Are” by Nirvana. It had everything, up and down strokes, as well as bar chords and even a solo. I think the process of getting that right was one of the most frustrating moments of my life, but also one of my proudest achievements. It wasn’t exactly Segovia but a great feeling all the same.

4. What tips would you give to people who have just started learning the guitar?

I don’t want to be all boring and bang on about practice, but it’s a no brainer really, like with anything, the more you practice, the easier it will be.

It’s quite important to get some tuition, if only to start you off, it can be expensive but save a lot of hassle in the long run. I’d been playing for about a year and decided to give lessons a go, I only went for a month due to money issues but progressed so much in that short time. I learnt a couple of really important things in that month. One was to not rush into things. It’s a lot more productive, for example, if you are learning a sequence, to start slowly at first, but correctly, and slowly build up speed until you’re doing it right. Trying to do something difficult straight off will be frustrating and you need to make you’re doing everything right, slow and steady and all that. That sort of leads into the other thing, which is to make sure you don’t pick up bad habits. It could be anything from the way you hold the plectrum to your fingering. Since I was teaching myself to start with, I’d gone about it in my own way, meaning new techniques were becoming unnecessarily difficult. Once I’d made sure I was playing properly, things seemed a lot easier. It’s a lot better to make sure you are doing things right to start with, even though it may seem easier to do it a more natural way, than having to change your playing style later in your guitar playing life, because you’ve made learning difficult for yourself.

5. Is there anything you’d recommend to other guitar players/learners (websites you’ve found useful, books, places to buy guitars/accessories etc)

Having someone there to let you know if you are doing things right, and encourage you really can’t be overstated, the money may be an issue, but even if you are having one lesson a month it’s important to know that you’re on the right track. If you know someone else that’s been learning, speak to them, and ask for any tips, or if you can have some supervision.

Try and find friends that are learning an instrument too, it doesn’t need to be the guitar, but it’s important to have motivation and I count myself lucky to have had friends I could play and progress with for a bit of extra drive. It can seem a bit tedious learning by yourself a lot of the time. Likewise, learning to music you like can help.

There are loads of tuition books out there.There will be something to suit everyone, as well as books to teach you your favourite bands music.

6. Who is your guitar hero?

Noodles from The Offspring, they were the first band I got massively into, and I learned a lot by playing along to their albums. There isn’t anything hugely overcomplicated, anyone can be a good musician if they go about it in the right way. The inspiration to write great and interesting music is what’s special, and truly individual about a guitarist.

7. What do you think of the music based games you can buy for games consoles?

I haven’t actually played any except for Sing Star which is just genius, especially for duets at parties! I really want to play Rock Band, but I’m pretty sure I’ll ignore everything I’ve said above, and get frustrated because I’ll be rubbish, and have a little cry. I would imagine these games are really good for getting people into music. Learning an instrument isn’t for everyone, and you can have some great fun playing and hearing new stuff, I’m sure it can teach you concentration and things too but that sounds rather boring.

8. If we asked you to play us a song right now, what would you choose?

“Carry On My Wayward Son” by Kansas, probably my favourite guitar riff ever, nothing like a bit of prog-rock to get the guitar juices going, erm, yes.

9. If we gave you a blank plectrum what design would you put on it?

I would imagine something altogether distasteful just so I could have a little chuckle, people can take music far too seriously after all.

To check out Rich’s guitar playing for yourselves visit www.myspace.com/thelibrarysuits. We’d also love to hear from others who are either playing instruments professionally or learning them. If you’d like to answer some questions, please get in touch via email. The address as usual is lauren.john@music.co.uk.