Paramore: The Only Exception 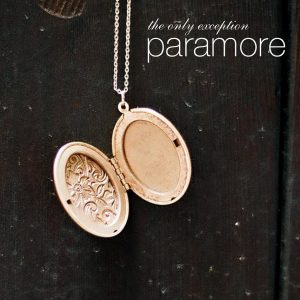 Someone recently said that us Brits cotton on to American talent far quicker than Americans do; well there may be some truth in that, but I’m afraid I have been a little slow to succumb to the charms of Paramore, and their lead singer Hayley Williams. But better late than never has always been my philosophy, so here I am reviewing the new Paramore release ‘The Only Exception’, which is taken from their number one album ‘Brand New Eyes’.

This single visits the acoustic/rock side of the bands repertoire and is full of Tennessee charm. It starts with a simple acoustic guitar arrangement, with piano and drums subtly working their way in the mix, as the song slowly beats out it’s tempo in your mind. As the emphasis on percussive sounds grows, so does the power in Hayley’s vocals, adding a slightly rocky edge to the distinctive folk twang that you can hear from the start of the song. For me, I think Hayley has what I guess vocal coaches would call ‘good colour and tone’ to her voice, and a soft touch which was interesting to listen to, but there was something missing in the chorus. Whether it was musically or vocally, I’m still undecided, but the chorus is often what sticks first in the listeners mind, and this one lacked a little sparkle. We’ve had a lot of up tempo indie/rock records to review recently, so it made a nice change to receive something more chilled. I think Paramore’s fans will enjoy this, as I have, though I’m not sure it’s made enough of an impact to have longevity in my music collection.

‘The Only Exception’ is released on April 5th. For more information on the band, visit www.myspace.com/paramore.