Nick Howard: Something To Talk About (Album) 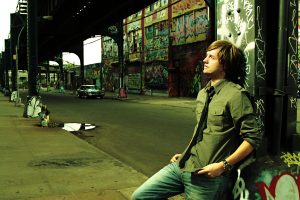 British born singer-songwriter Nick Howard, has crossed the atlantic to America in pursuit of his musical dreams, and his hard work over there seems to be paying off. Headlines tours, and his songs being placed in major TV programs are just some of his accolades. Now Nick is unleashing his album, ‘Something To Talk About’, but will this be a release that will get you chatting? Only one way to find out!

‘Something To Talk About’ is an album that hints at the musical genres artists like Jamie Cullum , and American Ross Copperman move in. There are slightly jazzy piano parts, and a whole lot of country/pop/rock melodies in amongst the ten tracks I reviewed. The American influences in the music, can most clearly be heard in album opener, ‘Better Man’, which sets the tone and pace for the rest of the album.

There are ballads, and mid tempo numbers, many of which have the piano high in the mix, while others feature soft drums and guitar arrangements. ‘On The Outside In’ stood out for it’s intro and lyrical imagery, while ‘Should’ve Known Better’ has got a superb lyrical flow. ‘Bullied By Dreams’ has an interesting title and reflective lyrics, while ‘Up and Down’ and it’s country guitars were quite rousing. So yes this album did get me talking to a point, because there are some points of interest in the lyrics and melody, and the vocals are pretty good, but the overall product, for me, isn’t quite there yet.

The album is all very nice, safe, and soft, which is no bad thing, but in some places it could’ve done with more power/punch in the vocal and melody. The endings of the tracks could’ve been a bit better in places as well. My only other comment is a personal one; that it would’ve been good to hear a happy, positive, self belief style song in among the lyrics about stress, strain, and struggle. These are just little things that would help polish up the product. There’s nothing major I could fault about this record, it just lacked that extra sparkle that would’ve sold it to me, and kept my attention throughout. The ingredients are there within Nick, he just needs to mix them up a bit more.

For more information on this album, and all Nick’s musical endeavours, please visit www.nickhowardmusic.com or myspace.com/nickhoward