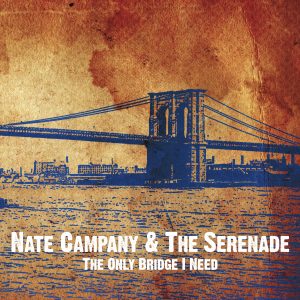 Today I take a trip across the pond for my C.D review, to cover Nate Campany and his band The Serenade, who have just released their debut E.P, “The Only Bridge I Need”. The New York based singer-songwriter, is launching himself as an artist after an impressive list of song writing credits. The fact that he’s written for artists like The Click Five, and The Backstreet Boys, certainly served to capture my attention, but what of his debut C.D?

Nate is billed in his press material as a pop bohemian, civil war fanatic, and Charles Dickens fan. Some varied interests and influences, although pop-bohemian is perhaps the most obvious element of the three on his C.D. He has used this and his mature voice to create a quite homely mix of reflective lyrics and melodies, which at times pay homage to traditional Americana music. ‘Shown’ is probably the best example of his Americana roots, which builds up into a catchy guitar number to tap your feet to. The production is spot on here, and on his other song ‘Is This The End’. I do have mixed feelings about the lyrical content on this C.D though. Although you can come at love and relationships from many different angles, both negative and positive, it does feel a bit like the stories all blend into one and get lost a bit on this C.D. I’d like to hear something a bit happier and in the case of his song ‘I Could Sing’, less cheesey. It was quite an enjoyable listen, and he’s certainly brought some life into this genre of music. I just think some parts of his songs need a little more work to make them stand out.

Nate Campany and The Serenade: The Only Bridge I Need is available now. Check out www. Natecampany.com for details.