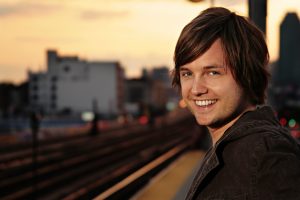 Music.co.uk is delighted to welcome Nick Howard to music.co.uk. A homegrown British talent pursuing his musical dreams in America, he has an interesting story to tell, and we’re happy to give him the opportunity to tell it! Read on to find out all about his passion for sport, his new album, and how his songs have been played on some of America’s biggest TV shows!

1. Hi Nick welcome to music.co.uk: first of all can you introduce us to you, and your music/style etc?

Thank you for having me! My name is Nick Howard, I’m a British Singer/Songwriter, but have called New York home for the last 5 years. My music is in the acoustic pop/rock vein, not dissimilar to Jason Mraz, John Mayer, James Morrison etc.

2. We’ve heard of people moving to London for the industry, but not so much America, what brought about this decision?

The first time I came here to visit I fell in love with New York, I made it a point to move here one day, and pursue my dream. It’s such an inspirational city, and when you are trying to do something as outlandish as rockstardom you need all the help you can get!

3. How did it feel when you first arrived in America, with as your pr blurb states, nothing more than ‘your guitar and a dream’?

Well a guitar and a dream doesn’t give you much in the way of security, so I knuckled down, took on a day job, which soon became a day job + night job, then a day job and a night job plus another night job. All the while I’d squeeze in music whereever I could, and eventually made the transition into music full time, not without a struggle though!

4. Which internet/social networking tool do you find most effective with promoting your music?

At first it was Myspace, now I think Facebook is the most effective. YouTube is great for people that need to visualize something in order to appreciate it, but I think Facebook is still the best method to communicate directly with your noble supporters.

5.  What has been the most memorable moment on your journey so far?

I’d say the first time I heard my music in a TV show that was pretty cool. It’s something that you work so hard for, and you start to wonder if it will ever happen, then just like that, your song is being used in one of the biggest shows on TV.

Second would be the biggest show I’ve played, which was opening for the American singer/songwriter Gavin DeGraw last Summer in front of thousands of people, it was pretty insane.

6. As a lyric writer myself, I’m interested in what tips you would give for getting songs/collaborations heard, and bringing them to the attention of music supervisors for TV/film?

Work, work, more work, patience, and making as many connections as you can. There is no replacement for time, and it’s just a case of making sure as many people are listening to your music as you can make possible. Never take no for an answer, and never leave doors closed. People will get back to you eventually, sometimes even after a year has passed.

7. How would you compare the American and British music scenes, now you’ve had experience of both?

Oddly enough, most of my successes have been here, so it’s hard for me to compare, I’m embarking on a European tour in March so I’ll be able to give you a better answer then!

8. How does it feel to be coming back to the UK to tour, and what should we all know about your companions Boyce Avenue?

I feel like the boy who left home, and came back with something to shout about! I don’t think that’s a real story, but it should be. Honestly though, I feel so lucky to be able to come home and tour the places I love so much. While I moved away from England, I’m still a very proud Englishman and can’t wait to spend time back in the homeland.

Boyce Avenue are awesome guys and great musicians. They are your classic out-of-the-box thinkers, using really clever marketing to make people know who they are. They utilised YouTube to gain a huge fanbase by playing cover songs, then interjected their own material along the way, and now are rocking and rolling. You have to be smart like that these days, it’s a different world in the music biz.

9. You’ve had your songs placed on quite a few US TV Shows, but are there any programs over here you’d love to hear your songs on?

I guess Hollyoaks is kind of a decent platform over in England for contemporary music, so if I can get some songs on that show I’ll know I’m doing well. The Spice Girls once said “we knew we’d made it when our song was playing on the Radio in the cafe in Eastenders”, so I’ll wait for that to happen to me before I can retire!

10. What is your favourite part of music history?

That the two greatest songwriters in history somehow grew up within miles of each other in Liverpool, and by random twist of fate ended up partners, and wrote the soundtrack for so many peoples lives.

11. What non music related skills/interests do you have, or would like to take up?

I’m kind of a sports fiend. I love football, cricket, and nearly all American sports. It’s been a dark few weeks as my family’s beloved Crystal Palace have gone into administration, and were cruelly docked 10 points by the FA, the stupidest rule I’ve ever heard of.

12. Time to be honest, what do us Brits do, that just isn’t quite the same in America?

We are so quick to knock our own country, put everything about it down, hate everyone that runs it, and get annoyed at the way it’s headed, but the second we are threatened or need to come together we couldn’t be any more proud of our history, heritage and self worth. It’s so funny, we have such a wonderful country but we never seem to give ourselves any credit. Americans make no secret of their patriotism; it doesn’t have to be squeezed out like it does in Britain. That though, is what makes us who we are, so I guess we shouldn’t change it.

13. And finally, please plug your album, in the style of an advert?

Nick Howard’s ‘Something To Talk About’ might just be the best album of 2010. If you don’t buy it you’ll never be able to dispute that opinion, so what are you waiting for?

Thanks to Nick for taking the time to talk to music.co.uk. You can find out more about this homegrown talent and his Anglo-American adventures at www.nickhowardmusic.com, and www.myspace.com/nickhoward. Catch him on tour in the UK with Boyce Avenue from March 16th until 26th.