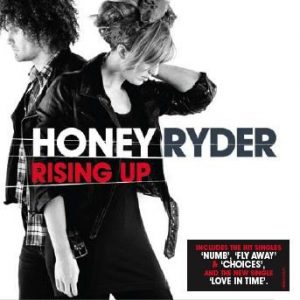 The Honey Ryder band have certainly proved a force to be reckoned with lately. Not only have they attracted some substantial airplay for their songs, and great press, but their business model, which involved them selling shares in their future profits, has attracted the attention of some notable names in the music industry. I caught up with the band for a Q&A after they’d performed at the House of Commons, with an MP’s band called MP4!

1. Welcome to music.co.uk; could you introduce yourselves to our readers, and let us know what you do within the band?

Lindz & Mart: We’re Lindsay and Martyn from UK Pop/Rock duo ‘Honey Ryder’. We are probably the tallest and hairiest people in the music business. When we play live, Lindsay is the voice, and Martyn is the guitar.

2. Where did your band name come from? Did you come up with any amusing alternatives before you settled on The Honey Ryder Band?

Mart: It’s the name of the sexiest Bond girl ever (from the film Dr No) – remember the scene where actress Ursula Andress walks out of the sea in that white bikini, singing something about mango trees?! We loved the name as it’s very sexy, and James Bond is about as iconic as you can get….!

Lindz: We’ve both been in loads of bands before, but as far as unusual names go, Martyn’s first band at school was called ‘Satan Was My Toothbrush’.

3. We read that you recently did a gig at The House Of Commons. a) What was that like? b) What did you think of the MP’s band? And c) Have you played any other interesting or unusual venues?

It was a good laugh – surreal but fun, and we had various MP’s coming up afterwards wanting to buy the album. MP4 were pretty good and really nice blokes – they force fed us JD and Coke afterwards. Feargal Sharkey got up and sang ‘Teenage Kicks’ with them, which was a moment to behold. We’ve just been to Dubai where we played on a floating stage at sunset – We’ve never had to get on a boat to a gig before!

4. With your recent radio plays, touring etc; do you feel now that you are ‘Rising Up’ in the music industry?

Definitely, our name is out there, and our tunes are being played all over the country in Pub Jukeboxes, Coffee Shops and High Street Stores! With persistence, hard work and a tiny bit of luck, we’ll hopefully rise to the top!

5. How would you describe your music and debut album to those who haven’t heard your music yet?

We’d describe it as a pop/rock album – with hooky guitar parts and feelgood anthemic choruses. I reckon it would be a good album to take on a road trip across the States as it’s got quite a West Coast vibe about it. Our influences range from singer songwriters like Alanis Morrissette and Sheryl Crow, to bands like Fleetwood Mac and Coldplay (to name but a few).

6. It sounds like your Business Models have attracted quite a bit of attention in the industry. Do you think the independent approach would work for everyone? And just how hard have you found it to get noticed?

It’s certainly quite a tricky route to take, and we’ve had our ups and downs, but at least we’ve been able to take control of our career creatively and financially, which is something that artists signed to major labels sometimes complain about. I think it’s always good to take the initiative and think outside the box as much as you possibly can – you can take yourself a long way in music (online for example), even if  your ultimate aim is to get the backing of a record label.

7. If you could invent your own Honey Ryder Facebook/I-Phone style application what would it be?

Lindz: Errrr –  you could have a Honey Ryder game where Martyn and I are riding around on bees and you have to shoot at us with honey-loaded guns??? Technology’s never been my strong point…..

Mart: Or how about a James Bond / Dr No game with Lindz dressed as Ursula and me as Sean Connery – or vice versa!

8. Have you ever tried, or been tempted by any Winter sports?

Mart: Lindz loves her skiing, and I’m a pretty good snowboarder after spending a season in the French Alps – although we are both VERY clumsy. (I’ve often broken my fingers and hands doing snowboard tricks, and Lindz is about as graceful as a fairy elephant)

9. This year among the vast numbers of ice rinks about, there is one in Wembley Stadium. What would be your ultimate place to have an ice rink?

Lindz: On the top of a skyscraper somewhere like Las Vegas, with glass around the outside so it feels like you could skate off over the side!

Mart: On a floating dock just off Cape Town, South Africa, where you could see all the great white sharks swimming around below!

10. What would get the Honey Ryder Band on their Soapbox?

11. Please could you plug your website…..in the style of an advert or sales pitch!

Are you sick and tired of being told what manufactured artists’ album you should buy for Xmas? Are you desperate to find a classic album which contains more than one decent song? If the answer is yes, then you need to visit www.honeyryder.com to discover the finest independent Pop/Rock Group in the UK. Watch their videos, hear their songs, read about their journey, and become a VIP member of their Club all for FREE!!!

12. And finally, what are your hopes for the future of the band?

To still be here in 10 years time – oh and to conquer the world while we’re at it….!

That seems like a pretty good note to end on, so thanks to Honey Ryder Band, and all our other interview subjects for helping to make music.co.uk an interesting place to be. More chat coming in 2010, so keep it locked on music.co.uk, and come back soon!