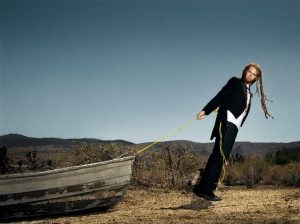 He’s got big ginger hair, he’s a surf icon, and he’s had a start to his career that some may only dream of. Welcome to the world of Newton Faulkner, the English singer-songwriter, with a unique guitar playing technique, several sell out tours, and a platinum album to his name. We catch up with Newton as promotion for his second album, ‘Rebuilt By Humans’ gathers pace.

1. Hi Newton, welcome to music.co.uk. As we’re a new site this year, and haven’t asked the question before, what should we know about you and your music?

2. There seems to be a pattern developing with your album titles (Hand Built By Robots, Rebuilt by Humans), what’s the inspiration there, and more importantly what’s next?

3. We’ve read in some early articles from 2007 that you’ve been offered some surf lessons. Have you taken up that offer yet, and also are there any other sports you’d like to try?

“I haven’t had the chance yet, I definitely will though. I’ve always fancied hang gliding too”

4. We’ve heard that you once performed in a Hot Air Balloon for a radio broadcast. In an ideal world where else would you like to perform?

“Yes, I did. It was awesome! Maybe like an under water mega dome, surrounded by massive whales and…I’ll spare you the aquatic wish list.”

5. Your website biography describes a ‘crowd silencing’ rendition of ‘Teardrop’, what performances/collaborations/etc do you think would silence you at a concert?

6. What do you think makes a guitarist individual?

“I’m part of a huge group of acoustic finger style players who use the body of the guitar for percussion, but I hope all of us bring their own thing to the table. Check out Eric Roche, oh and Thomas Leeb.”

7. I see you’ve been selling books of your guitar music, but what tips would you give those wanting to learn it, or the guitar in general?

8. Would you go back to the D.I.Y style of record releases? And what would you say to others who may be considering that approach?

9. Making your own guitar (to get a hammering) is pretty impressive. Is there anything else you’ve crafted, or if not would love to try creating?

“This as been such a persistent rumour, but unfortunately it’s not true. My guitars are built by a guy called Nick Benjamin, who’s a legend.

10. Finally, a word on your forthcoming album release, and the rest of 2009? How would you like to remember this year when it’s been and gone?

“I’m really happy with the new stuff, just got to wait and see what it does now. Hopefully this year should be a lot of fun, as long as I can avoid any further injuries.”

You can hear Newton Faulkner’s ‘new stuff’ when ‘Rebuilt By Humans’ is released on September 21st, and we’ll be posting an album review soon. In the meantime why not check out his previous videos and mp3s at www.newtonfaulkner.com.