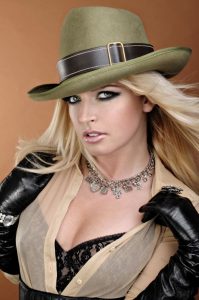 Today we’ve decided to introduce a bit of Anglo-American girl power to music.co.uk, and would like to welcome Kyrah to the site. Kyrah is a feisty British born singer-songwriter, currently living in LA, who had plenty to say when I caught up with her prior to her debut UK single release!

Why did you decide to launch in the UK before the US?

Well, I’m originally from here! An opportunity came up and the pop music scene is so great in the UK right now! It seemed like the right way to do things.

There’s already been some inevitable comparisons between you and acts like Britney and Christina. What do you see as the similarities and differences?

We all do commercial pop music, and often due to the production and the styles there can be similarities, but we each have different voices and personalities. I write my songs as well so they are based on personal experiences, or my own personality traits.

Is there anything/body else from the 80’s you rate besides Madonna?

I love everything about the 80’s, there was some great music made then. I love Cyndi Lauper, Sade and there were some great groups. Genesis, Police, and U2 made some of their best music then.

What have you been enjoying since you’ve been in America? (food/culture/etc etc)

Well to me, every state in America is so different, so it’s really interesting to go from one to the other; they each have their own vibe. In California the weather is perfect and there’s stunning beaches! In New York there are so many great museums and nightlife. One thing I love, is that no matter what city you go to there is always Sushi, which is my favourite!

You’ve said in your biography that you’ve a lot going on in your head, how do you find it expressing that in lyrical form?

Haha, sometimes there’s too much going on and I really have to try and stop thinking! Usually I write down all my random thoughts and emotions to let it all out, then I will pick up on a word or subject I have written and an idea will come to me. I then find it easy to put into lyrical form, because I can imagine the emotions I would feel singing it.

After working with some DJs in America, what would your DJ name be if you ever decided to give that a go and what style of music would you spin?

Great question! I would totally be DJ Wild Child since that is me all over and I used to hear those words a lot growing up! I would play a bit of everything, I really like it when DJ’s blend totally different styles together.

Did you have any pre-conceptions of life in Hollywood before you arrived there, and what do you think of it now?

I had actually been there a few times so I kind of knew what it was like, but I didn’t know how cut throat the entertainment industry is there. It’s really hard to make real, good friends. After living there for a while it surprised me what a small city it really is, you bump into the same people all the time!

What else can we expect from Kyrah after ‘Uh Oh’ has done the rounds?

Lots of edgy, dance pop. My lyrics all have meaning to them, but the beats are fun and upbeat. Also hopefully lots of live performances, that’s the best part for me!

Where would you like to play your dream gig? And who would support you?

I would love to perform in Madison Square Gardens, it’s just always been a dream of mine. I have also always wanted to perform at G.A.Y here in London. I would love a cool rapper to perform with me like Jay Z or Lil Wayne, I love them!

In some ways marketing and branding is very important to an artist’s success, so where would you like to take your brand? And if you were to lend your name to any product or promotion what would it be?

I would like to make an entire Kyrah empire of my own. I think anyone that is creative dreams of dabbling in a bit of everything artistic, whether it be fashion, music or film. I would also like to do a lot of charity work and use my success (if I have some!) to make a difference, that’s very important to me. I would lend my name to any makeup brand because I really need some new makeup!!

Finally, what else should our readers know about Kyrah?

That I’m a feisty, sassy piece of work, and I hope my music makes you want to dance!

You can see if Kyrah’s music will make you dance, when she releases her debut UK single, ‘Uh Oh’ on June 28th. To find out more information, please visit www.kyrah official.com.