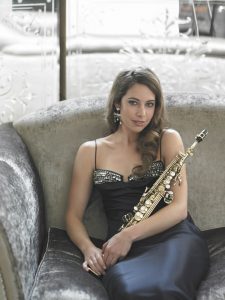 Following on from our successful piece on classical composer and conductor Alex Prior last year, we introduce another classical talent to music.co.uk, this time in shape of acclaimed Saxophonist Amy Dickson. Amy first picked up the instrument at age six, and has since risen to become an international star, performing with orchestras and giving solo recitals all over the world. She chats to me prior to the release of her new album ‘Glass, Tavener, Nyman’.

I guess the first question, is often the most obvious, so could you start by telling me your musical background?

I started playing the piano when I was two and a half and then the saxophone when I was six. I was very lucky to be living close to two wonderful teachers, with whom I studied for many years. My family were not musical, but my mother has a great interest in fashion and art, and my father is an architect. I performed in competitions regularly from the age of five. When I was 12 I started having lessons at the Sydney Conservatorium of Music, and when I was 18, I came to Europe to have lessons in London, Paris and Amsterdam, for one year. After that, I took a scholarship to study at the Royal College of Music with Kyle Horch, and at the Conservatorium Van Amsterdam with Arno Bornkamp, both of whom I desperately wanted to study with. They are, in my opinion, two of the greatest saxophonists, and I admire their musicianship very much.

What was it that attracted you to the Saxophone, and have you ever been tempted to pick up other instruments?

I have always been naturally drawn towards the sound of the saxophone. If I’m ever out, say in a restaurant, or shopping, and I hear a saxophone playing in the background, there’s something about it that makes me stop what I’m doing, and have a listen. I also played the piano for many years, and still love to play it for fun.

How did you find the Saxophone to learn, and do you have any tips for those learning it at the moment?

The saxophone’s a great instrument because it can adapt to any kind of music, and also because it’s such a vocal and expressive instrument. I’ve loved every stage of getting to know the instrument, and am still learning every time I pick it up.

You’re well known as a classical saxophonist, but are there any non-classical songs you like to play for fun?

Sure – as a saxophonist I’ve covered all kinds of genres of music over the years. Even the classical repertoire is often influenced by other areas of music, just because of the nature and history of the instrument.

What can you tell us about the music scene in your native Australia? Are there any names we should look out for?

The Australian music scene is an enthusiastic one, and the thing that I love most about it, is that it is so open to new music. I have sometimes been asked to play concertos which I haven’t even heard of before!

What made you decide to name your album after the composers who contributed songs to it?

My first album, Smile, naturally got its name from the title track. I couldn’t find an obvious one-word title for this recording, and quite liked the idea of naming it after the three wonderful composers whose music is on it. It’s since been pointed out to me, however, that if it had been named ‘Glass, Nyman, Tavener’, it could have been shortened to G ’n T – which would have been much more fun!

What can listeners expect from ‘Glass, Tavener, Nyman’, and what journey do you feel you have been on from the first album to this?

I feel that this album in itself is a journey. I wouldn’t like to dictate what that journey might be, but I find each of the pieces to be very powerful works. Preparing for the recording was a lengthy process, as I arranged the Glass and Tavener works, and had to teach myself certain techniques like circular breathing, and some tricky fingerings, before I could play them.

What do you enjoy doing outside of music?

I swim a lot, and spend most of my non-musical time catching up with friends and family. I’m currently addicted to watching Poirot too!

If music.co.uk asked you to take us on a) your ideal day out and b) your ideal night out, what would they involve?

My ideal day out would definitely be spent going to the zoo and having a good old chat to the elephants (if there are elephants at that zoo – sadly not in London). An ideal night would be to go to a fun bar with a beautiful view, lots of friends, some pretty heels, champagne and oysters!

What else can you tell us about Amy Dickson, any facts people may not know?

I was a surf life saver on Sydney’s northern beaches when I was a teenager, and I saved three people! I also used to teach little kids to swim.

You’ve signed deals to endorse various products, but if you had to design your own, what would it be?

Probably a good, hardy, yet stylish saxophone case, which would meet the hand luggage requirements on flights – something I’ve thought a lot about!

Finally, do you have a message for all our readers that will be finding out about you soon?

I hope that they fall in love with the pieces on this album, just like I did!

‘Glass, Tavener, Nyman’ is available from February 1st. For more information on Amy and her music, visit her online at www.amydickson.com