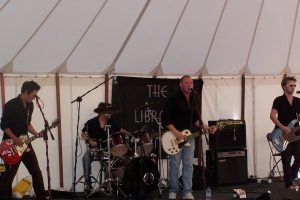 Group Shot of The Library Suits

As gigs go, this one was always going to be different. Entitled Music and Merriment, it was an event to celebrate the partial (yes I know it’s a bit odd) re-opening of Chelmsford Museum in Essex. I think I wasn’t alone in feeling some nostalgia arriving at Oaklands Park, where the Museum is located. I hadn’t been for many years. Amazingly, the famous Bear and Beehives were still there, along with a host of Stuffed Animals, Pottery, Glassware, and Exhibitions on Local History. This included a music room, which had info boards on Chelmsford’s Punk and Swing Scenes, a Ditchburn Music Maker Jukebox from 1959, and some audio clips. These archives feature popular acts from way back when, recalling memories of the local music scene, and venues such as the Saracens Head, and Chelmsford Corn Exchange. Some of the acts featured in these clips were playing in the music tent.

Families mingled outside in the sun, rockers tapped their toes inside the tent, and everyone seemed to enjoy the music. There was some old school rock hits from the 60’s and 70’s from Paul Nicholls, another trip back to the 60’s with the Mark Shelley Band, and the reformation of Punk Band Anorexia. The Mark Shelley band entertained with some classic Rock hits, while Paul Nicholls did a lot of Blues/Soul/Funk numbers. All in all some great summer grooves, which set the scene nicely for Anorexia’s set. These guys were way before my time, but their performance attracted a large crowd of dancing, singing hecklers, who were enjoying themselves so much they didn’t want the band’s set to end.

All the old school rockers put in a great performance, and they were easily matched by The Library Suits who gave a modern twist to the line-up. Jon, Matt, Rich, and Paul, stormed through a lively set full of songs from their forthcoming album Suffer:Recover, and other tracks from their current E.P, ‘Because It’s Somewhere To Be’. Despite the heat in the marquee, they gave a really enjoyable performance, seemed accomplished and well rehearsed in what they did, and even had some energy left for a game of football afterwards! I could’ve joined in, but to be honest I think I need a lot of practice first!

All in all it was an enjoyable afternoon’s entertainment, in a great setting, and the weather was kind too. Who could ask for more from a summer time gig?
Share this now:
-