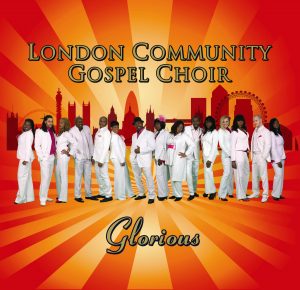 The London Community Gospel Choir are often billed as ‘the nations favourite choir’, and it’s not hard to understand why when you hear their outstanding voices soar over rugby and football pitches, arenas, and other venues across the world. Their vocal harmony singing has backed many a popstar too, showing just how versatile a Gospel Choir can be. The Choir are also recording artists in their own right, and are about to release their first ‘crossover’ album, which showcases a variety of inspirational songs and anthems, and popular classics.

Whichever songs the Choir pick, and record, you expect a mix of faith, hope, and inspirational messages, all performed by the Choir in their own unique style. This album doesn’t disappoint on that score. It starts off with a cover of the U2 song ‘One’, which has an interesting mix of subtle/intimate sounds, and a big vocal presence that would fill all four corners of an arena. The male vocal is high in the mix here, whereas the female voice takes over on the next track ‘Hallelujah’. This is a song I’ve never been over keen on, especially after it was drearily released as an X Factor single, but this is a nice version, that the choir do justice to. I enjoyed the song more than I expected, and the same can be said of the next track ‘When The Saints Go Marching In’, a song I have memories of playing on the keyboard while at school. They were not overly happy memories, but this version, with its acoustic/piano led style, and soft, soulful vocal has converted me. Some of the songs that followed were typical Gospel fare, like ‘Swing Low Sweet Chariot’, ‘Amazing Grace’, and ‘Abide With Me’, opinions on which I think will be subjective. Although the songs have been well produced/sung, I’d heard them sung by Gospel Choirs one too many times to get really excited.

What did arouse my interest were the songs that were unfamiliar, which provided the album highlights for me. First up was the Alison Krauss song ‘Down In The River To Pray’, something which I think will appeal to a broad range of people, and could even be a chart hit if the Choir released it as a single. There’s a greater emphasis on the music on this track, which is very catchy, and blends in well with the pop/soul vocal arrangements. My other highlight was the final track ‘God Is Love’, another song I hadn’t heard of before. This is a message laden track about love and respect for each other, and how beauty isn’t just skin deep. It’s a familiar, yet in this track interesting story, which is layered over a well arranged piano melody, and soulful vocals. In the latter part of the song there was a bit too much going on vocally at times, but it was still a great end to the album.

I’ve been interested in the London Community Gospel Choir for a while, and like the way they represent faith, positivity, and hope in their singing. I’m not particularly religious, but find it has an effect on me. Rev Basil Meade, has created a choir that performs Gospel classics with ease, and is equally at home singing pop songs. They can harmonise a cappella style, or work with music, and the result is well worth a listen. My only qualm is that some of the song choices are a bit predictable, and have probably appeared on their other CD’s, How about singing some other Gospel songs, or more popular music next time?

‘Glorious; is available from all regular music outlets from March 29th 2010. For more information on the choir, their concert dates, and workshops visit www.lcgc.org.uk