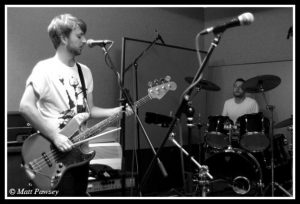 When I was younger, Rock/Indie/Alternative were dirty words to me, and all my commercial/pop ears heard were samey music, unimpressive/shouty vocals, attitude,  and an overall sound that made me wince with distaste. Today though, things are different. There are some great bands out and about, some of which have a tasteful pop/rock leaning, while others are embracing indie/rock in an easier to listen to, more melodic way. There are acts in both these genres that can really sing too. With all this in mind, I slip the debut album from Chelmsford based four piece The Library Suits into the player.

The first thing you hear is footsteps echoing down a corridor, moving ever closer to the music. A door opens to welcome you into the world of The Library Suits, and there’s a short burst of the band playing their song ‘It Starts And Ends’. It’s an intro that is pure genius in my opinion.

Suffer: Recover then continues with a mix of ‘album tracks’, short samples, and some very strong potential hit singles. 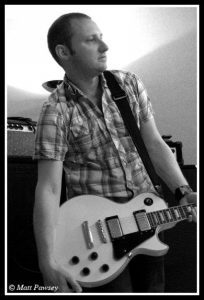 After a first listen, I did wonder how well all the pieces of the jigsaw fit together as a cohesive album, but after several plays I quite enjoyed the twists and turns.

Listen out for two versions of the song they have randomly called ‘Brackets’. The first is a toned down instrumental teaser that leads nicely into the full blown band version. It’s cheeky, youthful, and has a ‘party animal not wanting to grow up, and take responsibility story’ that’s easy to relate to. The drum rhythms on this track standout, and there’s some funky guitar jams dotted around the other 13 tracks on this album too.

Also listen out for the refreshing piano sample of ‘Vultures’, which turns out to be a segment of their song ‘October In The Theatre’. The full length version of this track is a good example of dark/power rock, though it’s a little bit repetitive for me, and the shouty/growl at the end dents the overall effect a bit. Apart from that I can’t really fault too much about this album, there’s just places where to me the music isn’t quite as smooth, or the guitar is overpowering the vocal a bit.

There are three songs/potential hits that I immediately warmed too, and put on repeat on this C.D. First up is Jeremy Kyle’s Inner Valkyrie’, a song with a very catchy intro, a credible commercial edge, and some very astute lyrics. Then there was the anthemic ‘28 Minutes’ and acoustic track ‘It Starts And Ends’. The former is definite sing-a-long material, while the latter showcases their impressive acoustic abilities. ‘It Start’s And Ends’ is also quite moving, though needed more group vocals. A peaceful, chill out way, to finish the album. 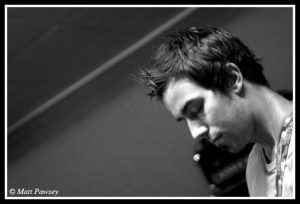 Overall, these guys certainly seem to know their riffs, chords, and rhythms, and I really enjoyed some of their lyrics too. Every song has a story to tell, and their lyrics seem to get right to the heart of every one. It might sound like they’ve swallowed a dictionary and TV guide at the same time, but it works!  This is a band that can cross between the alternative/commercial markets with relative ease. They will have you tapping your toes one minute, smiling the next, and reflecting on modern life in between. They like to surprise the listener as well, with their short instrumental samples, and impressive acoustic breaks.

As with any album, there were some things I enjoyed more than others, and a few things I would polish up, but that is the nature of things when you’re a music reviewer. Everyone has their own tastes and opinions. It’s a great album though,

so if you don’t mind, I think I’ll leave you all to check out www.myspace.com/thelibrarysuits, and go and sing along to some of my favourite tracks. After all, if they’re stuck in my head, I should really make the most of it! 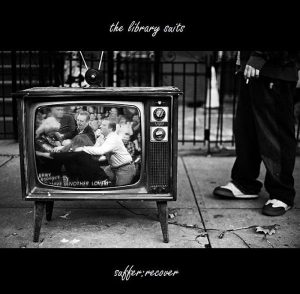 The Library Suits Debut Single ‘You Don’t Have To Be A Wizard’ is available now from I-Tunes and HMV.com.

Suffer:Recover will be available via download and physical purchase from November 12th.

COMING SOON: THE LIBRARY SUITS ON THE HOLLYOAKS MUSIC SHOW!