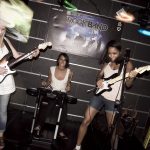 Do you secretly dream of being a superstar singer, or maybe a member of a rock band? Well you can be both, with the brand new Karaoke experience recently launched in London.

Karaoke Box in the Smithfield area has introduced Rock Band Sessions, held on the last Wednesday of the month from June. Members of the public can hire a room kitted out with all they’ll need to become a rock band for the night. Alongside normal room charges, a £30 fee will give you a full Xbox 360 set up with Rock Band. So you can not only sing your heart out, but rock out on the drums or guitars too! 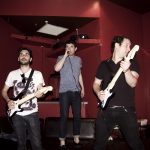 To celebrate the launch of this service, the venue held a special celebrity battle of the bands featuring stars from Hollyoaks and MTV. The night also featured Gavin and Stacey star Matthew Horne with his band Black Pudding, and singer Remi Nicole who both fought it out in the final. Remi Nicole and her band were crowned the ultimate winners after their rendition of Blondies ‘One Way Or Another’. As you can see from the pictures, a great time was had by all, but next time the star of the show could be you.