When I first heard about the British Music Experience at The O2, I was really intrigued by what it had to offer.  The more I read about it, the more I wanted to go and have a look around and test out these interactive features in the attraction.  Well, I finally got my chance to go visit, and what an experience it was!

Upon arrival, you are shown how your ticket works – unlike most tickets where you are granted entry, this is your interactive key to the whole experience.  It unlocks details on music history, and helps make your experience that bit more special.  It enables you to save information that you found out on the day, and records what you have been doing, so that when you get home, you have a permanent record which can be found via the website!
You enter into the attraction @ The 02 Bubble, and you are greeted by what can only be described as a portal of music

history. There are several rooms in front of you, as well as interactive booths.  Which way you go is up to you – maybe you want to go straight to your favourite period of music, or jump into the interactive parts, or stroll through music history, as if you were living through it year after year.

I was drawn straight into the 1993 to Present room.  As I walked in, I was greeted by the sound of Robbie William’s hit “Angels” – I loved this room already!!  What you notice straight away is all the pop memorabilia.  Being a big music fan in this era, it was great to spot things I had or wanted as a child, and I felt like I was a youngster once again. The first display case I went to, I was greeted by the Spice Girls Reunion Tour Outfits, Spice Girl Dolls, Take That Dolls, a Take That Tour Programme, and Boyzone merchandise. Wow, this was my era!  In front of the display case was a keyboard, and by swiping my ticket I could hear about the merchandise and the bands from that era.  Hearing about their history, and how they all shaped the music industry, was a brilliant insight into everything.

Behind me I noticed the Brit Awards display case, filled to the brim with various items from Brit Award Winners. The highlight for me was seeing Robbie William’s very own guitar which he used at Knebworth in 2003.  That is the one thing that is great about this place – you can get up close and personal to your favourite artistes, even if it’s just in the form of seeing something of theirs behind a glass window!

Next stop was the dance booth – oh dear!!! Again, using your ticket, you got to choose a decade to dance to. A screen in front of you went through the basic steps of the dance, then you were filmed dancing to the song.  I opted for a bit of line dancing, and danced to “Achey Breaky Heart” by Billy Ray Cyrus.  I have never laughed so much at how fun it was!  There’s many different options, from disco dancing to vogueing, the loco-motion to the birdie song – the choices were endless! You could even do the Macarena!  After you had been filmed, you were invited to go outside of the booth and swipe your ticket to watch your performance. Through the power of holograms a mini version of you dancing was projected onto a tiny stage and you got to see how good (or bad!) a dancer you really are.

After all that dancing, it was time to go back into the past and learn more about some of our great musicians – next stop – 1962 to 1966 – The Beatles era!  What a room!  Seeing all the merchandise there, hearing about it all, and about how rare some of it is- just amazing. As a Beatles fan, I was really interested in this part. I was learning all about how great Beatle Mania was, and seeing how crazy it was. The more time I spent in there the more I wanted to be back in the 60s experiencing it for real myself! 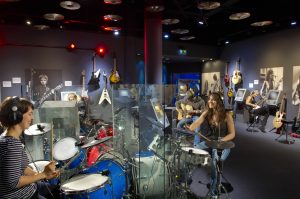 Once I managed to drag myself away from the room, I headed into the biggest interactive room of them all – The Gibson Interactive Studio! This is where your dreams of becoming a pop star seem that little bit closer. As you walk in, you are greeted by guitars, drums, pianos, a mixing desk, and a vocal booth – fantastic! After giving the mixing desk a try, and not really doing that well, I (bravely!) headed to the vocal booth. After browsing the choice of songs, I belted out a bit of Ms Dynamite and then Girls Aloud.  The great thing about this is, with the ticket it saves your recordings.  I am yet to decide if that’s a good or bad thing for me though!!!

After having a sing, it was time to leave the exhibition part, and head into the master class that was taking place.  I was fortunate to be able to attend a Photography Masterclass with three of the greatest and most inspirational photographers – Philip Townsend, Jill Furmanovsky and Mark Mawston – who have worked with the likes of The Beatles, Amy Winehouse, Duffy, Madness – you name them, they’ve shot them!

After a quick introduction, and being told how they got into photography, they showed us their favourite photographs and talked about what was happening in them, how they got the shot.  It was really inspirational and not just aimed at people who have a love of photography.  After the talk, it was time for questions and answers, where they revealed more stories and how they feel about the film/digital world of photography.

Although there wasn’t quite as much there as I was expecting, the exhibition was still fantastic – it wasn’t just aimed at a certain age group, it was aimed at everyone. You could take your family there, and everyone would be entertained, and it doesn’t matter if you’re not a big music fan either, because you would get some enjoyment out of the various interactive elements.  I would definitely recommend a visit to the BME, and if possible, try to tie in your visit with one of the many masterclasses that they have to offer, you might just learn something new!!

For more information on The British Music Experience, and future events held at the attraction, visit www.britishmusicexperience.com