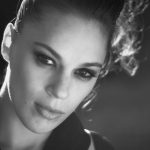 When news reached music.co.uk of a new singer-songwriter causing a stir on the London gig circuit, I just had to find out more! So out came the pen and paper, questions were crafted, and the result? An interesting interview with a talented young lady called Miri. Enjoy everyone!

1. Hi Miri, welcome to music.co.uk, perhaps you can start by telling us all a bit about yourself.

Hi, nice to be talking to you. I’m a singer songwriter. I’ve been doing music for a long time. I’m very determined. I like to do things because it feels right, not just for the sake of it. I’ve recorded my first album ‘Canvas’ which is a reflection of starting life over again.

2. Do you have any party tricks, hidden talents, things about you that not many people know about?

I like to do impersonations and accents to entertain my friends. Apparently my first ever impression was of Kenny Everett impersonating Mary Whitehouse when I was four.

3. Do you think it’s hard for a new artist starting out to find their musical identity?

It can be. There are always going to be challenges. I feel it’s important to have clarity on the music that you want to do so that you can really push it out there. If you are sure of yourself and what you want to do musically you can develop your musical identity and overcome any stereotypical perceptions and opinions that people may have of you as an artist.

4. How do you describe your music to people?

I would describe my music as being pop with an indie influence.

5. As you’re album is called ‘Canvas’ what would YOU paint on a blank canvas if we gave you one?

Oooh…I like these questions. They’re fun. I’m a sucker for sunsets, and when I was in Thailand I remember swimming in the sea whilst the sun was setting. It was so peaceful and beautiful that I would have to paint that scene on my canvas.

6. If you could invent your own unique MySpace or facebook application to benefit you or your fans, what would it be?

I would invent an application or spot that allows fans to interact with me as I write a special web-only song. I would suggest two possible options for each verse and chorus and the ones with the most votes win. I would then offer the song as a free download.

7. We’ve heard you’ve recently been hitting the live circuit in London, how’s that going? any interesting gig stories yet?

It’s been going great thanks. The audiences have been really receptive and have shown a lot of support. I’ve met some great promoters and other artists and groups along the way. Nothing to divulge yet in regards to interesting gig stories, but the next gig is 10th June at the infamous Madame Jo Jo’s, so I’m sure there might be a few tales after that one!

8. Who would be your ultimate artist to support on tour?

That’s a tough one as there would be quite a few. But I’m going to have to say Coldplay as they are one of my favourite groups. I’ve been a fan since they released their single ‘Yellow’ and it would be such an amazing opportunity and experience to support a group who has sold millions of records worldwide.

9. What story wouldn’t you mind reading about yourself in the tabloid press?

Miri performed to a sold out crowd at the O2 Arena, whilst Canvas hit number 1 in the album charts. I’d be happy with that!

10. If you could turn the tables and interview someone else, who would it be, and what would you ask them?

If he was still alive it would be Marvin Gaye. I’ve always loved Motown and Soul and finally got around to reading his biography a few months ago. It was very insightful. He was quite a complex character. I would ask him when all’s said and done what is it in your life that really mattered?

My plans are to continue to build up a strong solid fan base and to get the right management so that I can progress forward and have the opportunity to tour and to release a single from my album.

Miri will be appearing live in London throughout June. If you can’t make it to one of the gigs, then her music is available at www.myspace.com/wheresmiri. You can also read my review of her My Space tracks by clicking here.