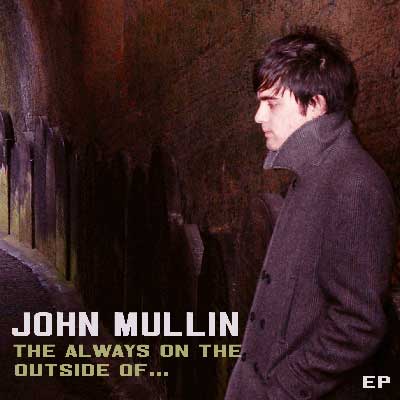 Described by his PR team as an Acoustic Troubadour, John Mullin is an Omagh born singer-songwriter with an interesting musical pedigree. A move to Liverpool saw him embrace their thriving music scene, and front cult indie band The Basement. Since then he’s re-discovered his Celtic Roots and is hoping to carve a career for himself as an acoustic/folk artist.

John’s acoustic E.P is released on August 10th, with a video for title track ‘Always On The Outside Of’ now available on You Tube. The song has quite a jaunty guitar rhythm, although the vocal is quite melancholy. It’s quite a catchy tune, with the lyrics telling a sad story of “always being on the outside of love”. I did have mixed feelings about the video though. The beach/wood/river settings where it was filmed suit the mood of the song perfectly, while John seems very comfortable in front of the camera, and with lip syncing. I think people will love or hate the decorated singing balloons/gloves. I thought they were quite fun first time round, but I think the novelty will wear off. My other comment would be that the quality of the camera work isn’t great in places. All in all though it wasn’t bad for a first attempt at a music video, and the song is quite infectious. It will be interesting to see what the E.P delivers, but if you can’t wait until August 10th then you can hear some of John’s music at www.myspace.com/johnmullinsongs.