Have You Heard Of These Iconic Bands? 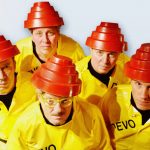 Music can sometimes be an education, introducing the listener to new sounds and new artists, and sometimes like today, press material lands in my inbox for artists I’ve never heard of. So fellow music fans, this is my education and perhaps yours, into the world of Chicken Foot, The New York Dolls, The Zombies, and Devo.

You might not guess it from the random name, but Chicken Foot is a band that I can only describe as rock royalty. All the members of the band have impressive careers behind them in two of the world’s most well known acts. Drummer Chad Smith used to perform with the Red Hot Chilli Peppers, while bass player Michael Anthony, Guitarist Joe Satriani and vocalist Sammy Hagar were all in Van Halen. Their self titled debut album is released to the U.K market on June 8th, and the band will make their live U.K debut at London’s Shepherd’s Bush Empire on June 25th. Tickets available from www.livenation.co.uk. From their press material it’s clear to see this band have a zest for life as ‘Chicken Foot’ and fully intend to rock their way to future success. Oh and they’re also creative too, their album cover is heat sensitive, so when you touch it, pictures of the band members will appear!

Chicken Foot aren’t the only ones to produce something new, as The New York Dolls prepare to release their fourth album. Formed in 1973, this band is a bit before my time, but the older readers among you may be familiar with their iconic work. Either way, fans old and new will soon be able to rock out to a new line-up and the new album ‘Cause I Said So’, released in the U.K on May 5th.  There are 11 original songs on the album, and a re-recording of Trash, which fans will know was on their debut album way back in 1973. To find out more visit www.nydolls.org

There are many bands from the 60’s and 70’s who are still touring today, often dusting off the hit albums, and hit songs they had way back when. The Zombies are one of these bands. Those of you who were around in the 1960’s will remember the success of ‘Odessey and Oracle’ a psychedelic album which celebrated its 40th birthday in 2008. Proving that the oldies can still be the best, the remaining members of the band, along with some new ‘touring’ musicians, played 3 sold out nights in London, treating the audience to a first live play of the entire album, and some other classic Zombie tracks. One of the concerts was filmed, and will now be released in the U.K on April 20th, although there’s one last chance to hear the album live, as the band perform throughout the U.K in April. For more information visit www.thezombies.net

Last but by no means least, are DEVO, who are also resurrecting one of their hit albums live. Do you sense something of a trend forming here? The album in question is Devo’s 1978 release “Q: Are We Not Men? A: We Are Devo” which despite its iconic status, has never been performed in its entirety. The 2009 line-up of the band seek to rectify this with exclusive performances at London’s Kentish Town Forum on May 6th and the ATP Festival at Butlins from May 8-10th. Formed in 1972, they are again before my time, but I do have a few facts for you.

• The name DEVO comes from the word Devolution and the idea that society, in America at least, had regressed. Their music reflected their views, with robotic rhythms and the synthesiser as a core sound.
• They have been described as everything from Punk, Post Punk and Art Rock to New Wave.
• They are known for visual/sci-fi stage shows, unusual electronic instrumentation, and random, often surreal humour.
• The 2009 Line-up: Mark Mothersbaugh – lead vocals and keyboards, Bob Mothersbaugh – lead guitar, Bob Casale – rhythm guitar and keyboards, Gerald Casale – vocals and bass, Josh Freese – drums.

This is just a snapshot of what Devo are all about; to find out more about one of rocks most innovative acts visit www.clubdevo.com .

Here concludes my piece on unknown quantities in the world of rock; have I been educated? A little, but it’s enough to know that checking out any one of these acts will be an interesting experience for anyone who is too young, or simply doesn’t remember their earlier careers.