A milestone that humans will never reach is always pretty impressive, even more so when it’s attributed to the great Irish institution that is Guinness. Now, while the ‘Black Stuff’ may not be my tipple of choice, I wholeheartedly join in with the celebrations, and say Happy 250th Birthday, Guinness!

As is fitting for such a big anniversary, the company will be celebrating in grand style with an event called ‘Arthurs Day’ held in Dublin on September 24th! The main focus of this event will be a concert at the world renowned Guinness Warehouse, which will feature a whole host of top music stars. Lined up to perform are Sir Tom Jones, The Black Eyed Peas, Kasabian (pictured below), Estelle, Razorlight, Calvin Harris, The Sugababes, The Kooks, Jamie Cullum, Soul II Soul, The Wombats, and many other artists. The stage is all set for an eclectic and lively party, with 2,000 people in attendance, many of whom are lucky ticket winners! Although the main focus of the celebrations will be the St James’s Gate Brewery/Warehouse, there will intimate gigs in pubs and venues across Dublin on the same day, allowing for a true cross city party!

Dubliners won’t be the only ones joining in with all the fun though, as there are plans to stream the concert to pubs and bars across the U.K. via Pub TV, and there will also be events happening in New York, Lagos, Yaoundé, and Kuala Lumpur. 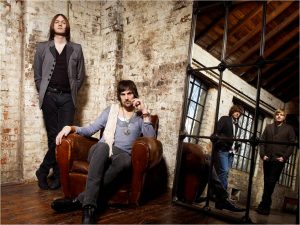 If you can’t get to one of these events, but still want to say Happy Birthday to Guinness, then why not join in with the Global toast to Guinness and it’s founders at 17.59 on the 24th. This is the date/time that Arthur Guinness signed the 9,000 year lease on the famous Guinness Warehouse/ St James Gate Brewery. The event that began the whole Guinness story!

To find out more about Guinness and its 250th Birthday visit www.guinness.com. You can also read about the newly established Arthur Guinness Fund.