General Fiasco: Ever So Shy (Single) 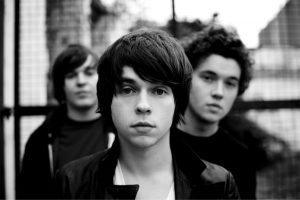 There comes a time in every indie/rock bands life when they release a single that somewhere in the lyric references that demon drink, alcohol. General Fiasco follow up their mighty 2009 song ‘We Are The Foolish’, with ‘Ever So Shy’, a song which opens with the lines ‘Let’s Get Wasted, It’s All We Ever Do.” Then the beat kicks in, and the song begins in earnest.

Just like ‘We Are The Foolish’, the music here is a rhythmic drum/guitar combination that bursts out of the speakers full of indie charm; there are plenty of instrumental breaks to groove along to as well.  The chorus is the strongest part of the song for me, and it’s this that will get the crowd singing and dancing along when they tour. There are two remixes that accompany the CD version of this single, and it’s the first extended remix that had the most impact on me. This mix has an interesting combination of sound effects and ethereal ah ah’s in its production which was quite engaging. This was followed by the Rockdaworld Wasted Mix, which distorted the guitar a lot more, and mixed this with pounding/pulsing clubby beats, and a repetitive lyric. Out of the three mixes on this CD, this was the one I really only wanted to listen to once, but it doesn’t take away from what’s a lively, up-tempo, well written song. It will be interesting to see how this song does when it’s released on March 8th 2010.

For more information on General Fiasco visit www.myspace.com/generalfiasco. Or scroll down for the video to ‘Ever So Shy’.