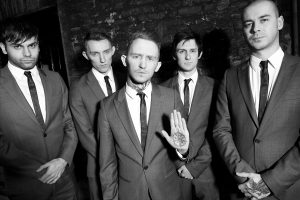 Another month has just kicked off in grand style over at the Top Man Ctrl My Space, with The Gallows taking the helm. The British Punk Rockers will be putting Hertfordshire on the map, with a month of exclusive interviews, news, blogs, photo’s and more!

For those of you who don’t know, Frank, Lags, Steph, Stuart, and Lee, formed the band back in 2005, and were soon making a lot of noise in the UK music scene. They are known for being quite outspoken, and so it should come as no surprise that their songs reflect not only modern Britain in the midst of a recession, but also some classical political punk as well. Their second album, entitled ‘Grey Britain’ was released earlier this year, and now the band are ready to take over Top Man Ctrl, and of course Curate, their end of term gig.

This time around the Top Man Ctrl live team will head to Birmingham, for a gig at the Flapper on October 29th. The 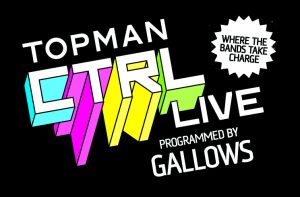 Gallows have hand picked all the new bands on the line-up, which starts with warm-up act Soni-Quella. These guys are native to Birmingham, and describe their music as ‘alternative bi-polar experi-metal’. They will be joined on support duties by Hertfordshire based Shapes, another energetic band, whose sound is a cross between Bloc Party and Jamie T. The night will end with headliners Invasion, recently named as one of NME’s Future 50 stars. Expect Perspex guitars, some interesting stage costumes and soulful vocals from lead singer Chan, and of course a unique blend of hard rock madness. If that sounds like your kind of party then you’ll find Flapper at Kingston Row in Birmingham, they can be contacted on 0121 236 2421. Their Myspace link is www.myspace.com/flapperbirmingham.

We’ll leave the final words up to The Gallows who seem rather excited about Top Man Ctrl and the Birmingham gig.

“Topman CTRL will be sick. Our chance to show the good people of Birmingham what real music is all about, what more could you ask for?! Check it out and see the bands we think you ought to know.”

To find out more about Gallows, and experience their month in control, visit the Top Man Control Myspace at www.myspace.com/topmanctrl. The band is also on tour throughout November and December. For dates visit www.myspace.com/gallows

Top Man Ctrl is an on-going monthly project, featuring some of the most inspiring, innovative, and talented music acts, who take over the Top Man My Space page, and also curate a live gig. The Controllers are chosen by the Top Man team based on what their customers listen to, who inspires them, and who inspires their designs. The bands in control then compile a wish list, and the end result is a great nights entertainment at the end of the month for all you music fans.