One Flew South: Last Of The Good Guys (Album) 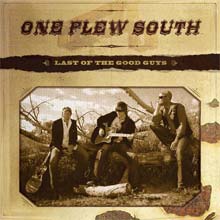 Sadly I haven’t just come back from a visit to America (dreams wistfully of sunshine), but thanks to the power of the internet, I’ve sourced some talent stateside for you all to check out. One Flew South hail from Nashville, which although known the world over for its country music heritage, didn’t actually launch the career of this three piece band. This honour was bestowed upon Decca records who ‘got’ their ‘three singers one voice’ style, and embraced the sound that Royal, Chris and Eddie have created. Their album ‘Last Of The Good Guys’ was released in 2008, and has attracted attention from major radio stations and magazines over in America. I’ve heard they hope to play some shows in the UK someday, and from listening to this album, I’d say they have a pretty good product to launch.

Their 12 track CD contains a mix of classic country style sounds, interlaced with some stripped back, almost spiritual music, pop, and a little bit of rock as well. Some of these sounds are quite subtle, others really make you stand up and pay attention, while others may be something of an acquired taste.

The classic country sounds kick off the album in style, with title track ‘Last Of The Good Guys’. This has a very catchy melody, and a few sneaky, yet very rocky electric guitar solos, which save it from being a typical country song. This is swiftly followed by a cover of the Andy Griggs song ‘My Kind Of Beautiful’, one of the tracks that helped to launch their career. This one is more of a groove/jam track, with a rock edge, and a slightly darker feel than many of their other songs. As a country act that’s unusually built around a three part vocal harmony rather than a main lead singer, the vocal arrangements on this, and some of the other tracks although faultless, lack a little variety, save for some short power bursts.

Despite the lack of what I can only describe as ‘oomph’ in places, you can’t dispute this bands ability as vocalists, or it seems, as songwriters. Chris collaborated with a guy called Billy Mann on the track ‘Life’, which is easily one of the strongest songs on the album, and perhaps a possible for a UK launch?. An acoustic/pop song that builds up well to a soaring chorus, it also has a few solo vocal parts, and some non standard lyrics to add variety to the mix. Other stand out tracks include the lively ‘Making It Rain’, with its interesting weather references, and toe tapping melodies. Again it has power and a rocky edge to the vocal, which for me is the bands strength. This is followed by another favourite ‘Blue Highways’, which veers away from the classic country sound of the rest of the album, and has some attention grabbing imagery in the lyrics.

When I mention acquired taste, two of the more spiritual tracks come to mind on this album; It Is Good’, and ‘Too Old To Die Young’. The former is stripped back in terms of the music, while the latter is a mostly a cappella track. While both offer something different to the mix, they are a little ‘preachy’ with their lyrics, and seem to be better suited to a traditional choral outfit than a country band. But whether you love or hate this style of song, there is still much to recommend this ‘Eagles’ influenced album. It has heart, and soul, an interesting lyrical taste on life and love, and although it’s not something I would normally pick up from a shop shelf, I did find myself drawn into some of the songs. To me, this is what it’s all about. A band that will not only appeal to country music fans, but a broader range of people who might not necessarily consider the genre. I think the UK might just find this with One Flew South.

For more information on this band visit www.oneflewsouth.com