This week the girls from wannabe girl band Dolly Rocker have reportedly called a ‘crisis meeting with their record label’ after not featuring on Radio 1’s playlist.

My crisis meeting this week has been watching their video :

The only way to describe it is an explosion in a topshop sponsored recording studio which has Stool Pigeon recording ‘Kid Creole and The Coconuts’ one side and the Ting Tings shutupandletmeGO’ing the other. Pop in a scream styled on the Bangles style walk-like-an-egyptian woahehow to complete the mix. 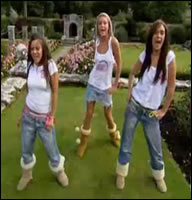 This is nothing new as their first er, hit, “Je Suis Une Dolly” was a modern day take on the Bill Wyeman classic “Je Suis Un Rock Star“. What is odd, is the complaints from the girls when T-Mobile dared to use mobile phone footage along side flash-mobs for advertising, an idea which was obviously exclusive to the Dollies. Double standards? Nah.

The Dolly Rockers are ex-X-ex-X-ex-X-you-get-the-idea-Factor, where in 2006 they reached the boot camp stage only to get a sour face look from Irish pop gnompresario Louis Walsh which spelled the end of their competition. I really like Louis, and if you want to spend a more productive time than watching the Gold Digger vid, you could hunt down the footage and do a JFK-esque style freeze frame back-and-to-the-left at the exact moment he realises they are crap.

The girls have reappeared in 2009 with the bedrock of any promo, a slagging off a similar group! Yes, they said The Saturdays “could have been five completely different girls and nobody would have given a s**t“. 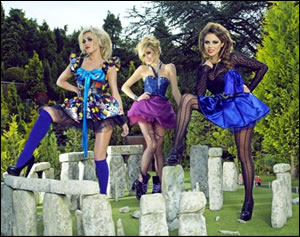 The not-so-s-club-junior Rochelle Wiseman zinged back by calling them ‘chavs‘ and saying “Well they could be any three girls because I don’t even know who the hell they are.”

Pop fact for Wiseman is she is dating Darren Randolph, a goalkeeper who is currently on loan at Hereford Utd. Thats not the fact, the fact is they have a dog called Tiger Randolph, why it wasnt called Tiger Wiseman I do not know.

I thought I should give more focus to reviewing the video, however to keep this article in key with it, I shall stick to the low budget theme. To get this effect at home, perhaps video yourself via a mobile phone reading it while standing a desk?

I really dont want to rate this song/video lowly, however the vid finishes with the blonde one doing a cheeky bit of fly-posting with the message “you have been dolly rockered” and that I cannot condone.