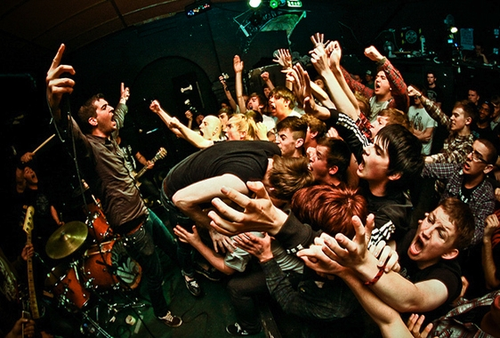 It’s hardcore night down the Camden Underworld tonight with no less than five bands bashing out their variations on the classic ‘core formula. Up first (at a ridiculously early start time, it should be noted) are Buckinghamshire’s Rendition, who blast their way through a more traditional take on all things HXC. A fairly tight proposition made even more impressive when you learn they are a band not yet one year old, fans of Pay No Respect, Terror and Madball may have a new favourite band. However it should be noted that a lone fourteen year old wannabe hardcore kid, swinging his arms like a toddler after the latest Action Man, made it hard to not fall down crying with laughter during the bands set.

Reviewing gigs sometimes has ridiculous benefits: like finding a breathtakingly brilliant band seemingly out of nowhere; it positively shames me that I had no prior knowledge of this quintet by the name of Landscapes, even more shameful that they remain largely unnoticed while playing great sets like they do tonight. Putting in a breakneck, emotive performance the Dodge City gang leave everyone here open-mouthed and unable to look away for even a second with their incredible live show; proudly able to call upon a frontman with stage presence and recklessness not seen since Gallows’ Frank Carter became ‘cool’. Watch this band very carefully, if the aforementioned Gallows received so much hype and attention, the mainstream magazines should be all over this lot like a rash.

After Landscapes rip-roaring performance whoever had to follow were always going to face an incredibly hard task, Burn Alaska (not Burn Alaska Burn as advertised) are given this job and to the quintet’s credit they give it absolutely everything. The crowd seem content enough but you can’t shake the feeling that the bands best years are yet to come, the Leeds natives Comeback Kid-esque brand of hardcore coming across more like a yappy puppy than a full grown badass growling hound-dog. Another band to keep a fixed eye on.

Carpathian, on the other hand, are most certainly the fully fledged beast; if we want to carry on the dog analogy (in a humorous context) then think of them as Clifford the big red dog’s unruly, hidden away, hardcore loving brother. A lot of people here positively adore the Australian five-piece and straight from the bands very first song the quintet do their very best to leave both the crowd and the venue in tatters. A staggering amount of bodies take flight as the infamous pillars in front of the stage become increasingly prime for a lawsuit; it’s also a testament to the band quality and following that almost every word is screamed back and the gang vocals are almost deafening. A cracking version of ‘SeventyK’ sums things up perfectly; Martin Kirby and co. are truly one of hardcore’s unsung heroes.

The release of new album ‘Empty Days And Sleepless Nights’ looks set to take Defeater’s album/perfection ratio to three out of three; debut ‘Travels’ (a concept album based on a man’s life from birth to death) and EP ‘Lost Ground’ telling the sad story of a World War II veteran from call up to death. Clearly Defeater do not live by the ‘brotherhood’, bro-down’ and ‘you mate, are a cunt!’ traditional lyrical structure hardcore usually employs and we are presented with a truly great band for it.

Throwing the hardcore kids are a terrific opening curveball in the shape of beautiful acoustic number ‘I Don’t Mind’, a curveball made even more exciting when many of those flat clap, hoody tied offspring join in and sing their little heart outs (bless ‘em eh?). Much like a mouth-watering starter opening your stomach for the delicious main course coming up, the slow number somewhat summons the intelligent heaviness to follow; Defeater teach everyone here tonight a lesson in how to be both crushing and original (with a little added chaos for good measure). If ‘The Red, White & Blues’ doesn’t get your hands in the air (stage diving as standard) you should most definitely check your ears (and the rest of you for that matter) are still working, ‘The Bite & The Sting’ packs more emotional punch than a night out with your newly single girlfriends (ending in tears) and suitably curtailed by frontman Derek Archambault’s passionate speech on his hopes that the bands songs don’t glorify WWII and that there were “no winners”. ‘Empty Days & Sleepless Nights’ opener ‘Warm Blood Rush’ then fits seamlessly into the bands set-list with its carnage inducing “DEAR GOD! WHAT HAVE YOU DONE?!” opening refrain looking set to detonate pits the world over.

As an encore of half-heavy, half-not, soon-to-be-classic ‘Prophet In Plain Clothes’ plays out the true nature of Boston quintet is shown; name me one other band that could make thought encouraging hardcore and then midway through produce a stunning, throat-lumping acoustic number that can have a room full of tattooed, bruised fans singing along. There is no band in the world right now like Defeater; savour them while you can. Incredible.