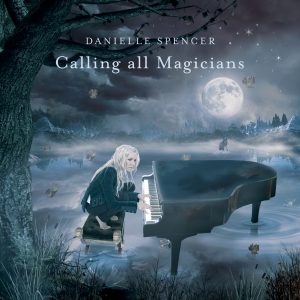 There seems to be an ever growing number of new Aussie artists unleashing their music on the UK recently, and the latest of these is the uniquely talented Danielle Spencer. Her album captured my attention when it landed on the door mat thanks to the mystical artwork on the album insert/cover, but would it hold it until the very closing strains of the closing track, ‘End Of The Story’; only one way to find out!

‘Calling All Magicians’ does make a promising foray into my consciousness, and Danielle’s pure, folk tinged voice, swirls and soars around the room as the opening track ‘Just A Thought’ plays out. This track illustrates what Danielle is all about as a writer: simple instrumentation, lots of lyrical content, and interesting structures to the songs. Some of the tracks that follow also display a toe tapping quirkiness, or the haunting, mystical air that you expect after looking at the album art. ‘The Broken Ones’ is one track that stands out not only for it’s haunting melody, but for it’s variation in tone/pace. This is swiftly followed by titles track, ‘Calling All Magicians’, which has a really enjoyable piano part and ‘Wish I’d Been Here’, which turned into a very moving ballad. Other tracks worth listening out for include the rousing ‘Fade To Black’, and melodic ‘Man To Wolf’. All in all it’s an album that flows from one track to another quite nicely, in an accessible, easy going way. The piano is high in the mix in every song, with the other instruments complementing the key strokes.

Along with the highlights, there were a couple of songs I wasn’t so keen on. ‘Back At The Red Door’ was a little too cheesey for me, with it’s nursery rhyme references, and I didn’t really understand the track ‘Citizen’. Overall though, this record has highlights, and elements that will mark it out from other releases, but there’s one flaw. I got bored.

Bored is probably the best word I can use, because this album didn’t hold my attention to the end. For me it was too much of the same tone, pace, and vocal arrangements/style. There were a few of the same ideas and words creeping in to the tracks too. Definitely a unique artist, but one I would listen to in smaller doses.