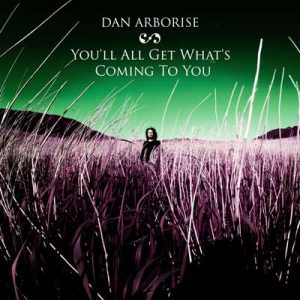 I don’t know what it is with acoustic singer/songwriters, but there’s a real mixed bag of talent out there. There are those that captivate with their lyrics, melodies, and vocal charm, and unfortunately there are those, that for me just don’t cut it. It might just be my subjective opinion, it might be lack of experience/imagination from the artist, or maybe they just aren’t very good. So sometimes reviewing can be a challenge, as is the case with Dan Arborise and his new single.

‘You’ll All Get What’s Coming To You’ is, in terms of the music anyway, an up-tempo gypsy/folk romp of a song. The overall sound is quite raw, and I imagine if he was sitting here playing the song, I would marvel at the intricate/face paced arrangements. This is certainly something that stands out, though I’m not sure how well the pace of the music, and the deep, drawn out, slower vocals fit together. It’s almost like one is racing ahead full of energy, while the other is a bit tired and is struggling to keep up. It needs an energy boost, though I think Dan recovers things quite nicely with his B-Side. ‘Cries’ has a much stronger intro, which is both gentle and melancholy. The music builds up quite nicely in the song, and creates an ethereal atmosphere. My only critiques here would be the song did seem to go on a bit too long, and the lyrics weren’t always clear. Apart from that it’s a pretty good song.

As I said at the start, this review was a challenge, and I’m not really converted to the cause yet. That said, this single is the lead-up to an album release, ‘Of Tide and Trial’, so maybe with this full length album, the tides will turn (pardon the pun) in his favour.

If you’d like to find out more about this acoustic troubadour, then head on over to www.justmusic.co.uk.