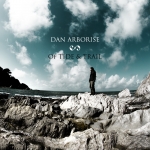 Released on August 31st, Of Tide and Trail is the new album from singer-songwriter Dan Arborise. Eagle eyed music.co.uk readers will notice I have already reviewed his single, which didn’t quite cut it with me, so how would the album rate? Well in some ways, it continued where the single had left off, with a vocal tone and arrangement that didn’t really capture the imagination, in fact if I’m being a honest it was a little dull.

Dan’s strengths to me lie in the music, and he writes and performs in the acoustic/folk genre well. Tracks like ‘Another Side Of The Sky’ stood out for their well written melodies, whilst ‘She Told Me How To Love Her’ creates just the right amount of reflection and melancholy. ‘My Dear’ and ‘My Child’ are probably the ones that will get your toes tapping, while ‘Under Your Spell’ has a slight hypnotic edge to it.

The best track for me has to be ‘Feet In The Sea, Head In The Sand’. I can clearly see the direction being taken with this song, and quite enjoyed the ambient/ethereal feel to the music. As the title suggests, this song takes you right back to nature, and could easily be used in Wildlife films and suchlike. It starts off quite slow and calming, then a drum rhythm kicks in to provide a quite a captivating beat. I don’t think it needed a lyric as it stands up on it’s own as an instrumental track, but it was definitely a highlight of the album. Saving the best till last huh? All in all I did enjoy the album more than the single, and there are some definite highs. As I said before though, I’m feeling the passion, strength, and potential in the music, more than the vocals. It’s something to work on in the future maybe? In the meantime, this album will hit the ground running on August 31st, so if you’re a fan of the genre, make a note in your diaries and check Dan Arborise out for yourself.