Our Creative Tribute To Michael Jackson

A while ago we wrote that we’d like to do something different to pay tribute to the King of Pop. We wanted something nice for people to look at. Something that didn’t just go over old facts, myths, and rumours. Something that recognised his talent. We asked you all to get creative through words, arts, and crafts, and I’m delighted to say we’ve had our first submission. Big thanks to Little Imp, a craftbubble.com user for her lovely card, which I hope you will all enjoy viewing. If you have anything you’d like to contribute to these pages, then please email lauren.john@music.co.uk. 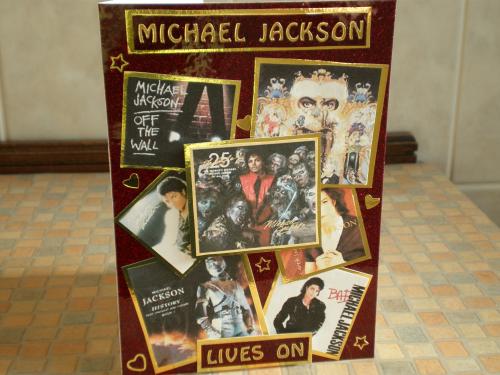 Our second contribution comes from life long Michael Jackson Fan and Poet Michelle, who’s sent us a few of her poems about Michael, which you can see below.

All of my life I’ve admired you from afar
Not because of your celebrity but because of who you are.
They say that fans don’t truly know the people who they love
But I have my own impression about the man behind the glove.

You didn’t allow the entertainment biz to define you as a star
For that is what you did for work, but it wasn’t who you are.
Let me explain just what I mean now that I have the chance
You were not merely the dancer, you were the art of dance.

You were not only the singer whose voice was warm and true
You’re the heart of every melody, the songs were part of you.
You were the very rhythm in every song you wrote
You reside between the sacred space of each and every note.

A man in awe of nature some thought of that as odd
A spiritual human being who appreciated God.
You found joy in the little things most people cast aside
Focused not on destination, but the pleasure of the ride.

Unafraid to express emotion, you wouldn’t try to hide
I felt a strong connection to your very human side.
You did not build your legacy on accomplishments alone
But in the many hours spent by your “get well” calls on the phone.

You visited the hospitals in many different lands
That speaks volumes as to who you are, a loving, caring man.
Sensitive to others who had lives ridden with pain
You offered all your aid to them, never asked “What will I gain”?

The tabloids wrote you were “different”, your true character denied
Attempting to change my opinion of you, their lies I did not buy.
I always thought the best of you and that will never change
I think the irresponsible journalists are the ones who were so strange.

Hollywood gave you the claim to fame, but from me you can not hide
I see right through the hullabaloo to the Michael who’s inside!
The more I learned about you, the more I clearly see
The man we called the “King of Pop” was very much like me.

Concert In The Sky

My heart is broken, and sometimes I cry,
But I’ll meet you later, at your concert in the sky.
We’ll dance along the rings of Saturn
Gliding in a rhythmic pattern.
Comets soaring across the night sky,
We’ll moonwalk past Jupiter, through space we will fly.
Unlimited by the boundaries of our human form,
So dance your magic, take the stars by storm!

A youtube find, where pianist and MJ fan, pays tribute to the King Of Pop by recording a version of MJ’s hit song ‘Human Nature’