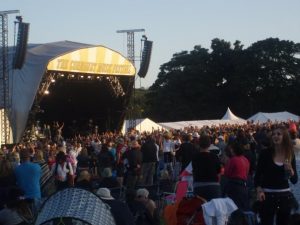 You don’t need me to tell you that the festival season is in full swing! But you might like to know our photographer Janie was out and about at the Cornbury Festival in Oxfordshire recently. Check out her review of the event below, and keep your eyes open for our photo galleries from the two day event.

The Cornbury Festival – Oxford’s answer to Glastonbury – is a combination of good music, good company and good entertainment. Held at Charlbury in Oxfordshire, this festival took place on the 11th and 12th July, and included music from Imelda May, The Pretenders, Scouting for Girls, The Sugababes as well as up and coming artistes such as Boy Least Likely To.

* Boy Least Likely To – A really entertaining band – not at all what you’d expect!  Quirky songs, that really get your foot tapping away. Definitely one to keep an eye out for in the near future!

* Peter Green & Friends – The former Fleetwood Mac front-man entertained the crowds with some of the greatest hits from his back catalogue.

* Dodgy – The original band from the 90s drew in a strong crowd for a great sing-a-long!

* Magic Numbers – They really had a great time on stage, and the fun atmosphere travelled through the crowd. With their family and friends watching, they performed a fantastic set. At one point they caused chaos for the security guards, as they invited fans to come up on the stage and join them!

* Sharleen Spiteri – Despite the rain starting to come down, Sharleen pulled in a strong crowd.  Performing hits from her solo career, and some classic Texas tracks.

* The Damned – The original 80s rockers put on a fantastic set for their fans.  The keyboardist really showed everyone how it was done, and could of performed the show solo at some points!

* Scouting for Girls – Nothing stops their fans. The rain was pouring, but they stayed put to see their idols perform – and what a performance!  Singing all their hits, they entertained, and made it worth being out in the rain!!

* Imelda May – A Cornbury Festival favourite, who has attracted the attention of a wider audience after her recent acoustic set at Glastonbury. Imelda did a mind-blowing set, in which she bought the spirit of the 50s, into the 21st Century. If you haven’t heard of this stunning young lady yet, you need to check her out as soon as possible!!

* The Pretenders – Chrissie Hynde still has it!  The crowd were in total awe at her performance; she really rocked the stage, and moved the crowd, performing all the classics, and a couple of sneaky covers thrown in for good measure.

* Sugababes – The longest surviving girl band of the moment put on a cracking performance. Such professionals and they really strutted their stuff. The crowd were going crazy for them, and why not?  They were all stunning, and spot on with their vocals and performance.

To sum up the whole weekend – there was something for everyone.  The children could play, the adults could relax and everyone could enjoy the mix of great musical talents and entertainment!!  This is one festival/weekend that everyone should experience at least once… If not twice or more!