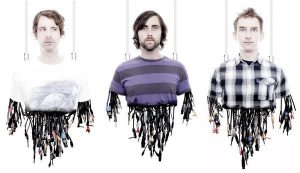 Christmas adverts, Christmas songs, Christmas films, we’ve all been there, done that, and got the t-shirt! But what we haven’t yet experienced is Christmas Sleepercurve style, so Music.co.uk took off armed with some juicy questions to find out about Sleepercurve’s musical year, and their plans for the festive season.

1. Hi guys, welcome to music.co.uk, perhaps you can start by introducing yourselves to our readers?

Yeah, pretty damn well really! We had a big shake up of our line-up November last year – not with personnel, but with what instruments we play. Basically Mark used to switch between bass guitar and keys, but since discovering that he is, in fact, a fully qualified synth wizard, we realised the error of our ways, and since then we’ve gone from strength to strength! Particular highlights were playing Download Festival and The Camden Crawl, but we’ve played so many amazing shows, and won over so many new fans it’s just been a really satisfying 12 months. Still got the single release and 1 more tour to go though, so the fun isn’t over yet!

3. What are your favourite/least favourite parts of Christmas?

Favourite part is probably getting home, seeing some old friends, having our parents cooking replace the vitamins we’ve lost during a shockingly poor tour die. Basically recharging the batteries, and re-connecting with people that we really miss.

Least favourite part is listening to religious do-gooders prattle on about ‘the real meaning behind Christmas’. I find it pretty hard to relate to something that happened 2000 years ago in the Middle East (if at all). I think festivities should evolve to suit the times we live in, besides, as pretty much most people know, it was originally a pagan festival to get over the glumness of mid winter by going out, drinking, and basically being as debauched as possible…so I guess it’s come round full circle!

4. We all watch a bit of Christmas TV at some point, what would your ideal program list look like?

I think the charts are pretty much irrelevant full stop these days, let alone the Christmas number1. How is anyone going to compete with a single, with a multi-million pound budget and months of TV promotion behind it! Bring back the 70’s I say…Slade, legends!

6. Has Sleepercurve ever been tempted to write a seasonal ditty?

We are now, it’s about designing Santa a more suitable mode of transport that can travel faster than the speed of light, and be in more than 1 place at a time, just like electrons or light photons…

7. What would your letters to Santa ask for this year?

A sugar daddy to come along and help us pay for recording time for our album, a boxed set of Moomins DVDs (the old Polish ‘fuzzy felt’ version though, not the crap Japanese animation) and errrr, yeah, World Peace, why not eh…

8. If you could put on your ideal event to celebrate Christmas or New Year what would it be?

A concert, filmed on a giant iceberg floated into the Thames, that’s projected onto the moon via laser beams, that can be seen right across the world (though upside down in the southern hemisphere), starring ourselves, Slade and Wizard!

There’s going to be another single coming out late April / early May, which we’re heading over to Bristol to record at the start of the year, then we’ll be getting our arses back out on the road again. We’d also like to volunteer ourselves as guinea pigs for India’s space program

10. What calendar could music.co.uk give you to fill in all your gig dates etc on?

Ooh, can we have one featuring various images of Ted Danson throughout the ages?

Turbowolf, Don Broco and Stornoway, a mixed bag (or Christmas stocking if you choose) but one that is full of glorious surprises, not rotten tangerines and lumps of coal!

12. Finally we’ll end how we started, by finding out a little bit more about you guys. So could you a) describe each other in 10 words or less and b) let us in on something people might not know about you.

b) We were once trailed by an Argentinean film maker called Pablo who was 5ft 2″ tall…!

So there you have it, one of our first music.co.uk Christmas interviews, and wasn’t it a novel one! If you’d like to find out more about Sleepercurve then surf along to www.myspace.com/sleepercurve, but don’t forget to come back to music.co.uk for more Christmas delights!