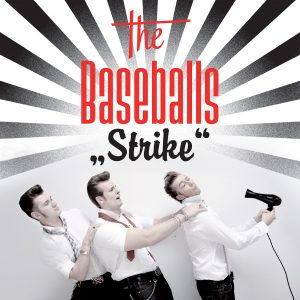 “It’s a bold move to take on such well known pop songs and give them a big makeover, but I think The Baseballs have struck a ‘home run’ with this album”
Music.co.uk

This is my first introduction to German trio Basti, Digger and Sam who make up The Baseballs, but what an introduction it was!! ‘Strike’ is the bands first release in the UK, and introduces a brand new audience to the 50’s style ‘Rock A Billy’ that has been tearing its way across Europe. The essence of this release is simple, choose 12 well known tracks, add in the Elvis influenced vocals, high class rhythmic bass playing, and some other classic be-bop/rock n roll sounds, and you get something that’ll put a great big grin on your face!

Granted, it does take a few minutes to get your head around what the band and their merry musicians are trying to do here, but once you grasp the concept, you just run with it, and have fun listening! What initially makes this release interesting, is that among the song choices are quite a few originally sung buy women, such as ‘Umbrella’ (Rhianna), ‘Bleeding Love’ (Leona Lewis), and ‘Don’t Cha’ (The Pussycat Dolls). On paper, it’s never an easy task taking on songs sung by females, but The Baseballs make it look easy!

Other tracks on ‘Strike’ to get The Baseballs treatment include ‘I Don’t Feel Like Dancing’, made famous by the Scissor Sisters, ‘This Love’ by Maroon 5, and one of my favourites, the anthemic ‘The Look’. My other album picks would have to be ‘Hot N Cold’ (Katy Perry), and although I was never a fan of the original, the vocal harmony/barbershop style displayed on ‘Bleeding Love’ (Leona Lewis) was interesting too.

The only blip in this collection is probably ‘Angels’. I don’t think this Robbie Williams classic works as well as some of the other covers, which seem like they were born to the 50’s style, but apart from that it’s a great introduction to The Baseballs sound. It’s an easy album to get drawn into, and while The Baseballs took a risk taking on such well known tracks, I think it’s paid off. If there was a book written about how to make cover versions your own, then I think it’s safe to say The Baseballs would have a chapter in it! If you’re looking for something to sing, dance, and enjoy some summer fun to, then ‘Strike’ is the album for you.

The album ‘Strike’ is available now. You can also view the video to their first UK single ‘Umbrella’ by clicking here. For more information please visit http://www.the-baseballs.com/