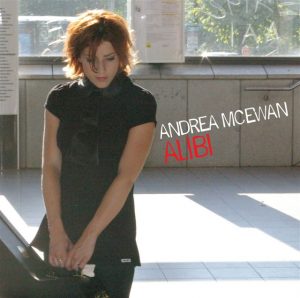 Andrea McEwan is an Australian singer-songwriter, now based in Berlin, a city which has enchanted and inspired the former theatre/television actress. Although Andrea has been writing songs since she was three years old, it was moving to the U.K in 2006 that really saw the start of a music career. After touring with, and writing for, Katie Melua, Andrea is now embarking on a solo career, with the release of her debut single and album, which will both hit the U.K on June 1st.

I have recently received a copy of the single ‘Alibi’ to review, a song that tells the story of an unfaithful love rat, and it’s this that stands out for me. Andrea is evidently a well versed and creative lyricist. The music does run along the same lines as the folk/jazz that made her label mate Katie Melua famous, but for me doesn’t quite grab the attention in the same way. Although the song creates a mood, it doesn’t really change pace and I was expecting the chorus to be more immediate. That said, Andrea has created quite a distinct sound and vocal, which would be right at home on a movie soundtrack. I’d say it has promise, and a lot of the ingredients are there, it’s just missing a little of the promised sparkle. What the rest of the album will bring, only time will tell, but there’s sure to be many more quirky narratives to enjoy. In the meantime you might like to visit www.berlinlovestory.com, a fascinating blog full of Andrea’s experiences in Berlin; there’s even a few music related anecdotes in there too.