Music.co.uk are pleased to announce we’ll be out and about at some live events in the coming months, so watch out for all the photo’s and reviews, coming your way soon. To kick things off we sent our new friend and freelance photographer Janie to Ali Campbell’s gig in Birmingham. Here’s what she had to say about the former UB40 singer, and his performances with the Dep Band.

“As the lights were lowered, a voice came over the speakers “Ladies and Gentlemen, are you ready to party?” – the crowd cheered – “More importantly, are you ready for Ali Campbell?!” – the crowd roared with what can only be described as a mature version of hysterical excitement.

Before Mr Ali Campbell was to grace the stage, an unknown singer walked onto the stage – Jessica Agombar.  The best way to describe this young starlet?  A reggae version of Alesha Dixon.  With her powerful voice, Jessica wowed the crowds.

Then, it was time for the man himself.  His strong backing band of nine – featuring trumpets, a saxophone, keyboard, drums, and guitars – appeared on stage and started jamming.  A pleasant summery tune, that made you really want to get up and have a little dance.  If you closed your eyes you could really feel like you were in some gorgeous hot country.  By the time the jamming session came to the end the crowd were going wild, “WE LOVE YOU ALI!” was being continually shouted and then he entered onto the stage.  Ali went straight into a solo track, the crowd of 1,700 were dancing and really showed how much they were enjoying the show. 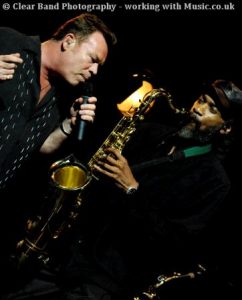 At the end of the song, Ali declared:  “I am going to dedicate this show to a musical legend.  Michael Jackson – he was a real talent”.  And on that note, he went straight into another track.

Ali performed for just over an hour and a half, then went off stage, leaving us with his band performing another jamming session.  The crowd were going wild yet again – “WE LOVE YOU ALI! WE WANT MORE!!” – naturally he had to return for an encore and performed a couple more tracks when suddenly he shouted “STOP THE SHOW!”.  There was a moment’s silence before the crowd realised, this was part of the performance.  “I didn’t hear you ba ba ba-ing loud enough… Let’s try that again shall we?” – second time round, the crowd didn’t let him down.

Of course, there is only one song that the show could end on, and that was “Red, Red, Wine”.  I thought the crowd had already reached fever pitch, how wrong I was.  As soon as the first note was played they erupted into a mass cheer and more shouts of “WE LOVE YOU ALI!!” and then sang along as loud as they possibly could, this can only be described as the Ali Campbell equivalent to Robbie William’s having the Glastonbury crowd singing “Angels” back at him.

Although I could not be classed as a fan of either UB40 or Ali Campbell’s solo work, I have to say I really enjoyed his performance.  He did a mix of UB40 tracks, covers, and tracks from his solo albums, including the all important new release ‘Flying High’.  How did the crowd react to these new tracks? – “OOOOOOOOH! … WE LOVE YOU ALI!” – I think it’s safe to say there was a very happy crowd of concert goers at the NIA that night.”

Ali Campbells U.K tour finishes in Cambridge on July 4th, before heading to dates in Italy, Malta, Peru, and The West Indies. His album ‘Flying High’ is out now. More info at www.alicampbell.net

Janie Burden is a freelance photographer, working under the name Clear Band Photography. She’ll be representing the site, and photographing/reviewing at the following events this summer:

All photo’s and content belong to music.co.uk/Clear Band Photography so please don’t copy, save/download without prior permission.