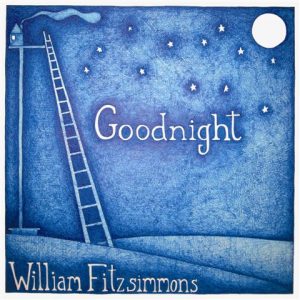 Our 15 questions feature (or 14 if you’re a solo singer and don’t need to talk about your band name) is going down really well of late, and we’ve had some great answers from all the new talent out there. This time round, we bring you the interesting character that is William Fitzsimmons, a folk singer-songwriter from America.

1 – What stage are you at in your career at the moment?

Goodness, that’s a bit tough to answer in the moment, and I suppose would only be terribly accurate in hindsight.  But I think the most appropriate response would be “transition.” That’s a bit vague, but I think it’s fair given I’ve encountered a bit of a crossroads after recently coming out of the worst period of my life (so far).  I have a grouping of songs behind me that deals with rather specific subject matter and now I’m at the point of figuring out what will come out after much of that period is immediately behind me.

2 – What is your music background? (Who are you and your band members? Tell us your story!)

I grew up with music as a very regular part of my life and it’s largely always been there.  My parents were both blind so sounds were our family’s primary form of communication.  We had many, many instruments in our home and if there wasn’t a Joni Mitchell or Vivaldi record on, somebody was playing the piano and singing.  And although I was taught (forced) into developing skills in several instruments through my childhood, music was always loved, but never something I ever considered doing as a profession.  I ended up pursuing and achieving a career as a psychotherapist and only got back into music whenever I was already happily a practicing therapist.

3 – How do you describe your music to people?

Well I don’t think the artist is necessarily in the best position to describe what they do in terms of bias, but to me it’s really just contemporary confessional folk music.  It’s a bit of therapy set to melodies really.  I think it leans rather heavily on the side of self-disclosure, perhaps sometimes too much for some people, but I like to look at it as being as honest as I can make it, short of telling every last secret I know. Although I get pretty close to that point.

4 – What do you think about people downloading music online?

In terms of iTunes and the like, I think it’s wonderful.  For my own music habits, I tend to purchase some records from shops and others from iTunes, depending on if I’m traveling or if I really want the artwork of a particular album, etc…My personal belief is that both types of purchasing can exist so long as both are supported.  As a musician whose livelihood is largely supported by legal downloading, of course I’m definitely in favor of when people actually pay for the music.  I believe that in the times we’re in it’s the responsibility of the artists and music community, however, to find ways to make people actually want to support what we do.  It’s definitely a different situation than it was even 5 or 10 years ago, but as long as there are individuals and groups committed to making and promoting meaningful creativity, it will always work.

5 – What dream tour would you love to be on, with any past or present bands?

Ah that question is nearly too big to answer.  There’s honestly too many and if I said everything on my mind it would basically be a traveling 3-day festival, which might get difficult in terms of the travel arrangements.  In seriousness, though, I suppose I’d have to say to get to tour with Nick Drake and Elliott Smith would probably be as amazing as it could get.  They’re two of the best ever that I never got the chance to see play while they were still alive.  I’d give a lot just to hear one song.

6 – What have been the biggest obstacles for you, to get your music heard?

I’ve had the extremely rare privilege of my music being heard before I ever really put any effort into making it so.  Even early on I really didn’t have a clue about promotion or how the process of being a working musician was meant to go.  I just made some songs because I needed to get some thoughts that were driving me crazy out of my head.  And I don’t mean that at all in an arrogant manner.  Rather, I just feel so terribly fortunate that so many people responded so well to the songs right off the bat.  If there’s anything that’s proven to be a difficulty along the way, it’s been the occasional strong reaction people have to the overly disclosing and uncomfortable affectivity that’s in some of the material.  Not everyone has the stomach for, or is in the right emotional mindset, to deal with some of the thoughts or feelings I’m bringing up in the songs. Still, I’m actually rather happy that people seem to have such visceral and robust reactions to what I do.  It lets me know that I’m doing something different, and something that can actually affect people.

7 – What is the best freebie you have ever been given?

I don’t know if it would technically count as a ‘freebie,’ per se, but I’d have to say my main touring guitar, my Taylor acoustic.  It was a gift from my former wife, and it’s been with me through nearly every show and song that I’ve ever written.

8 – Everyone has a song that annoyingly sticks in their head, what is yours at the moment?

Right now it’s probably “Poker Face,” by Lady Gaga.  Although I’m usually put into the indie folk category, I have this weird fascination with pop music and sometimes I get obsessed with evaluating and attempting to understand what makes a song so compelling, no matter if it’s a huge radio hit or something no one has ever heard.  Say what you will, but there’s brilliant music written in just about every genre you could think of.

9 – Who are you tipping for the top, music wise?

The most moving music I’ve heard in the last couple years has definitely been from Bon Iver. Justin and the band are certainly not unknown anymore, which is wonderful, but “For Emma” is one of those records; I won’t be satisfied until everyone owns a copy.  One of my other favorite bands lately has been Paper Route, a group of super-talented guys out of Nashville.  Everyday I wake up expecting them to be on the cover of Rolling Stone. I have no doubt one day soon they probably will (and should) be.

There’s not as much of it lately as there used to be (that’s probably a good thing, though), but whenever I do have a bit of time off I usually lean towards the quieter things.  I tend to like sitting outside with a cup of coffee (or beer, depending on how early it really is) or having a meal with friends, or just playing music without any performance tied to it.  I never really got off on partying or acting crazy; give me a comfortable chair and some good people to talk with and I’m all set (well, that, and several pints, of course).

11 – Have you discovered any interesting music related sites online?

I’m really awful about ever “discovering” new things in terms of the internet or music, and most of the stuff I come across came explicitly from the recommendation of someone else.  A recent one I’ve enjoyed quite a bit is ‘thesixtyone.com,’ which recommends music based on people’s ratings of it.  I enjoy similar sites like Pandora and Last.fm quite a bit as well.

12 – Which comes first, the music or the lyrics?

Haha, it’s a good question, but I think people tend to put too much stock into the answers that are often given to it.  I don’t have any hard and fast rules in terms of how I must write or song and I’ve certainly written lyrics first and vice versa.  Most often it’s the music and melodies which lead me into the words the music seems to want to convey.  But it’s probably rather limiting to insist on doing it one way or the other.

13 – Tell us about your next gigs and why we should be there!

I’ll be doing several festival and headline dates in the UK and Europe around August.  I suppose people would want to be there if they have a penchant for honest and evocative music.  I enjoy putting as much of myself as I can into the shows and performances.  People seem to connect with that element perhaps more than anything else I can do.

14 – Interview questions can be quite dull, so what do you really want to be talking about now?

The answer would always be the same: beer and cigarettes.

If you’d like to find out more, or listen to William’s music, then visit his official website at www.williamfitzsimmons.com. The album ‘Goodnight’ is released on June 29th.