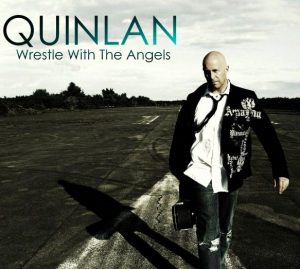 In our first year online we introduced many new faces to music.co.uk, and 2010 will be no different! Although along with the unsigned/up-and-coming acts we’ll be featuring, there’s also a few more established names you may not have heard of. Today I introduce British actor and musician Quinlan. Quinlan has appeared on many British TV programs, including The Bill and Eastenders. I caught up with him as he prepares to release his new single.

Hi Quinlan, I’m afraid to say you’re a brand new artist in the eyes of music.co.uk, so what would you like to tell us about yourself?

Well, its been an incredible journey for me, and I have kept my music more direct to my fans over the years, and on an independent level. I’m about to release my 4th album, and this is really the first big commercial project I am taking on. It’s just the perfect time for me now and everything has really picked up and gained momentum. The first single is very exciting, it’s called “Wrestle with the angels” It’s a bit different but I hope people like it.

A 20 year career in music is pretty impressive, how would you sum it up, and is there anything you attribute your staying power too?

I just do what I love and concentrate on making music my fans enjoy, and do as many shows for them as I can. It also takes hard work and you have to love making music. It also helps that I have done a fair bit of acting.

How have you found it combining singing and acting? Do you prefer one over the other?

Music has always been my first love, and it’s always going to be a great part of my life. My fans are very important to me. But acting is also a great creative outlet for me while earning a living. It would be hard to choose one over the other.

Do you have any special memories or stories from your acting career to share?

There are so many, too many to mention lol. I do remember one time I was warming up on keys for a TV show, and I turned around as someone said hello, it was Roger Daltrey from The Who. That was a very fond memory.

Are there other acts you’ve worked with, besides Roger Daltrey from The Who, and have you learnt anything from working alongside them?

You never stop learning in this game, and I’ve learnt from huge established acts, as well and new and up and coming artists. I play in a rock band called “Ugly Mother” and they’re forever teaching me new things. I find the best place to learn is on stage.

You’ve said that right from a pre-school age you wanted to be a musician, is there anything else that has stuck with you from a young age/for a long time?

No way! Music all the way! All I can remember is music.

Having worked on many films and TV shows, you must’ve have seen some special effects in action, seen a few tricks of the trade, worn a few interesting costumes, do you have any favourites?

I once had to wear a 1940’s army outfit in the middle of the night for ITV’s Foyles War. It was freezing, and the costume was, let’s say, very tight in many places lol.

If we asked you to play us a tune right now on guitar or piano, what would you choose?

My new single “Wrestle with the angels”. I would give you an exclusive piano version to enjoy.

What is your new single all about, and why should we listen to it?

Well it’s a real song with real meaning. It’ also a little different from the typical pop songs, and produced with a real indie rock edge. I think it’s catchy and has everything you need for a great pop song.

Finally have you a message for all the music.co.uk readers who will be reading about you soon?

Thank you so much for the support, and I hope you enjoy the new single and video. I will be sure to send you a new album and I love the website!

Quinlans new single ‘Wrestle With Angels’ will be released on February 14th. Keep your eyes peeled for a single review, or visit www.quinlanworld.com for further information.